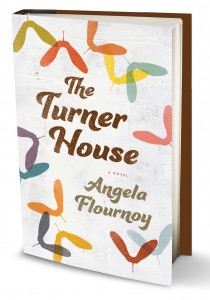 The fact that October is just around the corner means that one can now enjoy pumpkin spice anything with wild abandon.

Whether latte, yogurt, oatmeal, or bread, the pumpkin craze is in full swing, despite our still sweltering weather.

Along with pumpkin and the onset of fall, October also brings another book to add to the ledger of the Under Cover Book Club’s selections.

Since the National Book Award finalists for 2015 will be announced on October 14, I thought it only fitting to choose a title from the long list that was recently leaked.

Thus, I have just ordered, and present to you, “The Turner House,” by Angela Flournoy.

Flournoy, a graduate of USC and the Iowa Writer’s Workshop, has been a contributing writer to such illustrious publications as The New York Times, The Paris Review, and the Los Angeles Times.

In addition to having taught at both the University of Iowa, and the Writer’s Foundry at St. Joseph’s College, she will shortly be joining the faculty at Southern New Hampshire University as well, and it is this impressive background that she brought to the table with the release of her debut novel earlier this year.

“The Turner House” is a new look at the American family, as it has weathered the storm of the last few decades.

Following the titular family, we first meet the Turners as Francis and Viola leave Arkansas, along with their young son, Charles, for a better life up north in Detroit.

Once arriving in the motor city, the Turners take up residence in a house on Yarrow Street, where the family will stay, in some capacity, for the next 50 years.

During the ensuing half-century, the Turners will see the birth of twelve more children, as well as the decline of a once

vibrant Detroit, and subsequent flight to the suburbs of its more affluent residents.

Grandchildren will join their ranks, the family will lose its patriarch, and the time will come when Viola also must leave her home, too frail to live alone any longer.

Despite the decaying neighborhood around it, the Turner House has stood through 50 years of ups and downs. Now, as Viola moves in with her son, the family must decide what to do with the home that oversaw all the secrets and skirmishes, the tender moments and tirades that made their family what it was.

Making the decision all the more difficult is the dawning realization that the home is worth only about a tenth of the mortgage Viola owes on it.

Told mostly through the voices of Francis, the patriarch, Cha-Cha, the eldest, and Lelah, the youngest, the story takes us back and forth between 1950’s-era Arkansas, and Detroit, circa 2008. By selecting these three characters as her primary focal points, Flournoy ensures that the full family story is told. Through their three sets of eyes, we are able to see three different generational realities, as well as the very different family dynamics for a child born first of thirteen, and the child born last.

Through it all, the city of Detroit weaves its own story, almost as though it is another voice lending itself to the Turner family chorus.

Fellow author, Ayana Mathis raves, “Utterly moving and tough as nails, ‘The Turner House’ is a love story as immense as the family it describes, and as complicated as the city that made them. A clear-sighted ode to the bonds that make and break us, to resilience across generations, to shared joys and solitary struggles, Flournoy’s debut is as fresh and bold as they come. Commanding and unputdownable!”

Unputdownable is a good thing, to be sure, for once I get settled in with my pumpkin spice latte and a good book, I don’t plan to go anywhere.