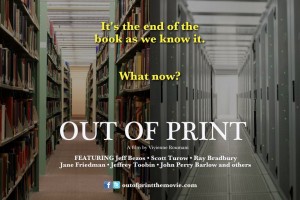 Books as we know them have been around the block a few times.

The last major change in the format of the written word came around the time of Christ, when the codex – basically a scroll cut into smaller sized pages to facilitate easier reading – came into existence. With the subsequent invention of things such as the printing press, mass distribution of printed material became a reality, making books not only our most powerful informational tool, but also one that had truly stood the test of time.

Now, we find ourselves in the midst of another sea change. The humble book, at the top of its game for the past two thousand plus years, is finding that it is no longer the go-to guy in the information game.

Digital media, e-books and social networking have become the new tools of choice. Google has replaced the Dewey Decimal System, and does anyone under thirty even know what an Encyclopedia Britannica is?

Where now, in our ever-changing world, is the place for the book? How can a new author find his audience with so many digital options already out there? How will this shift in the way we seek out and consume information affect the way our children learn and are taught?

The truth is, the answers to all these questions are still being determined. The new film, “Out of Print,” directed by Vivienne Roumani, takes a peek into this culture of change, looking for answers to the aforementioned questions, even as the answers themselves continue to evolve.

Narrated by Meryl Streep, the film, which has its west coast debut at the Newport Beach Film Festival on Wednesday, May 1, delves into the curious notion that as our information sources change, we are, in fact, changing as well. Sharing the perspectives of writers, educators, teens, and parents, “Out of Print” shines a light on our new digital frontier.

One of the most interesting points raised is how this shift is affecting the next generation. According to the film, 2005 was a tipping point of sorts, as it was then when adolescents’ use of the Internet for reading surpassed the use of traditional books.

One might think that it shouldn’t make a difference – as long as the information is being found, what does it matter through which medium it arrives?

According to Jerrold Cooper, a professor at Johns Hopkins University, the Internet has instituted the use of a sort of “mental triage,” in which students are skimming the surface for important facts, rather than digesting the whole message. In fact, he asks, when one is learning in this manner, “Where is the time for thoughtful reflection or complex arguments?”

This loss of critical thinking is a side effect of not only the minimizing of quiet time spent engrossed in a book, but of our society’s need in general for instant gratification. The students in this film themselves admit to feeling anxious if there is not instant internet access, and the thought of reading a whole book is one they find to be daunting.

Just one of the issues explored in “Out of Print,” this idea that the landscape of education being forever altered is one that begs for further review.

Journalist Jeffrey Toobin, however, has a different opinion about this condensation of information. He says, “People will go for a snippet of Dante rather than reading all of Dante. But, people who would take a snippet probably wouldn’t have read Dante anyway.  A snippet is better than nothing.”

I for one am not sure I want to live in a society of snippet-seekers. I love a good book, and the simple pleasures that reading one brings. I value critical thinking above instant downloads.

Maybe we should start our own counter-revolution. First item on our agenda:  meet up at the Triangle for a screening of “Out of Print.”

“Out of Print” will be shown on Wednesday, May 1 at 8:00 p.m. at the Triangle (formerly Triangle Square). For tickets, visit NewportBeachFilmFest.com.