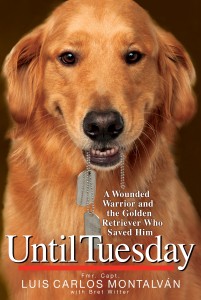 Those of you who read the Under Cover Book Club selection for January, “We are Called to Rise,” by Laura McBride, will remember meeting specialist Luis Rodriguez-Reyes.  Luis, a young soldier, experienced the unthinkable while serving in the Middle East, and came home with the wounds to prove it.

While his injuries were physical, to be sure, it was the emotional scars Luis carried home that weighed most heavily on him. Experiencing remorse for his actions while deployed, and carrying the heavy burden of survivor’s guilt, only compounded the symptoms of PTSD that Luis had to also learn deal with on a daily basis.

Although a fictional character, Luis gave us a brief glimpse into the very real challenges our veterans are asked to face. These exceptional men and women are asked to put themselves in often inhuman situations in order to protect and serve, then return to civilian life, going about their business as though they haven’t just returned from hell.

Now, we have the opportunity to hear from another, real-life Luis, as retired Army Captain, Luis Carlos Montalván visits the Huntington Beach Public Library March 26 to share his story, as told in his book, “Until Tuesday: A Wounded Warrior and the Golden Retriever Who Saved Him.”

Montalván, a highly decorated veteran, found himself in a post 9/11 Iraq, assigned to patrol the Al-Waleed point of entry, one of the most critical border crossing areas in the strip of land joining Iraq and Syria.

Tasked with keeping both arms and insurgents from making their way into Syria, it was while fulfilling this duty that Montalván was ambushed, and narrowly escaped with his life.

Upon his return from this deployment, he found the services available to him to be less than what he needed, and 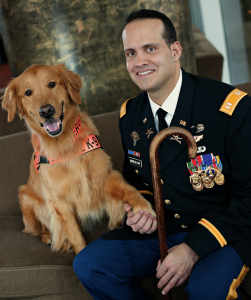 had a difficult time adjusting to a non-combat zone life. Facing failure as a productive civilian, he re-upped for a second tour. During this period, he shares that he had a difficult time understanding what he and his men were continuing to fight for, and highlights a soldier’s disillusionment with the choices his government was making for him back home.

After writing a critical op-ed piece for the New York Times, Montalván was honorably discharged, and returned home a wounded veteran saddled with the vague yet all-encompassing diagnosis of PTSD.

Tuesday was a golden retriever who had been trained as a service dog, able to offer emotional support to those he assisted. Despite having successfully worked with inmates as part of the Puppies Behind Bars program, and in a home for troubled boys, Tuesday found it difficult to put his trust in, and therefore fully connect, with any of his human counterparts.

By some miracle, Luis and Tuesday found each other, and have been able to create a mutually supportive relationship that has rescued them both.

Tuesday has provided Montalván with the extra love and support he needed in order to reclaim his life, by, among other things, helping him to recognize and deal with his anxiety. At the same time, he has in turn taught Tuesday how to build a trusting relationship with a human partner, and completely fulfill his responsibilities as a service dog.

Montalván says, “We aren’t just service dog and master; Tuesday and I are also best friends. Kindred souls. Brothers. Whatever you want to call it. We weren’t made for each other, but we turned out to be exactly what the other needed.”

Montalván will be appearing at Huntington Beach Public Library at 7111 Talbert Ave. on Thursday, March 26, at 7 p.m. in the Library Theatre to talk about his experiences and his book. On Saturday, March 28, he’ll be in the library’s Tabby Theatre to read aloud his children’s book, “Tuesday Tucks Me In.” Kids and adults will have an opportunity to meet Tuesday.

Just a short drive over from Newport, the trip will be worthwhile for animal lovers who believe in the redemptive powers of human-canine relationships, patriots who wish to shake the hand of a man who sacrificed of himself for the good of his country, or anyone who simply loves the inspirational story of someone able to not only overcome, but thrive.

For more information on the event, please visit hbpl.org.