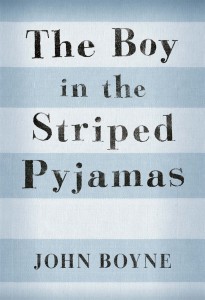 It’s no secret that I make my kids read in the summer. I’m just mean like that, I guess. Usually, there is at least one child complaining, including my 15 year old, whose English teacher has taken over assigning the books, and for whom I have become mere enforcer.

Despite all the whining and pleading that often accompanies reading time, the boys have had the opportunity to enjoy some really great reads during our summer book-fests.  Perhaps my favorite thing about our summer reading is that in the less hurried days of summer, there is plenty of time to reflect, and it provides a perfect avenue to open up discussion about important life lessons.

Last week, Braden, my 11 year old, finished up “The Boy in the Striped Pajamas” by John Boyne. Although it has been on our library shelves for some time, I had never read it myself, so we read it together.

In this tale of the Holocaust, told through the eyes of a naïve young boy, we meet Bruno, who is sent to live on the outskirts of Auschwitz (Out-with in his nine-year-old vernacular), with his family, including his father, who is the Nazi Commandant.

Although the progeny of one of Hitler’s high-ranking officials, Bruno is completely oblivious as to what goes on in the camp. He befriends a young boy named Shmuel, who lives on “the other side of the fence,” and through their daily conversations across this fence, he begins to explore the difference between their two lives, as well as discover all the similarities that bind them together, despite the hatred that should be keeping them apart.

As you can imagine, over the course of reading the book, we had many conversations about why people would ever choose to treat other human beings in such a way. At one point, Braden commented that many didn’t have a choice. For them, it was do as Hitler said, or put their own life on the line.

It was this comment that sparked our most important conversation of all. We discussed the fact that one always has a choice. Although the consequences may be dire, and sometimes personal sacrifice is required in order to do the right thing, we can always choose our own behavior, even when evil itself is knocking at our door.

It was one of the universe’s beautiful reminders when just days after our conversation, a tribute to the now deceased Irena Sendler, known to some as the female Schindler, popped up in my facebook feed.

For those who are unfamiliar with Ms. Sendler, as I was until a few months ago, she was a Polish woman who couldn’t find it in her heart to stand by and watch what was happening during the Nazi occupation.

As a member of the underground group Zegota, she was responsible for smuggling 2,500 Jewish children and babies out of the Warsaw ghetto, spiriting them away to lives of safety under assumed names with Christian foster families.

During her time as a smuggler, she kept careful records on each child she rescued, in the hopes that they would be reunited with their families after the war. Sadly, for many there was no family left to reunite with. Eventually, Irena was captured. She was beaten, tortured, and sentenced to death (a fate she managed to escape,) but never talked. She kept the secrets of all 2,500 of her precious charges safe, even when the penalty was death.

In fact, Irena later said, “I was brought up to believe that a person must be rescued when drowning, regardless of religion and nationality. The term ‘heroine’ irritates me greatly. The opposite is true. I continue to have pangs of conscience that I did so little.”

Here was a woman who had a choice, and literally saved a generation through her selfless actions. I am honored that I was able to share her story with my children, and grateful that those much contested 30 minutes of reading each day led us on a journey that included such a powerful lesson.

To read the stories of Irena Sendler and others heroes who risked their lives to help during the Holocaust, please visit shalomshow.com/holocaust_heroes.htm.