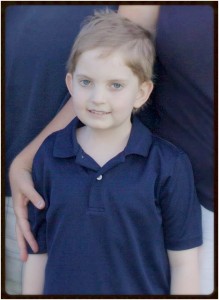 Newport Beach bids farewell to a giant hero wrapped in a small package. Julian Dunn’s time here was a brief nine years, but his influence is forever.

Childhood cancer was a harrowing way of life for the Dunn family for five years. The anguish of losing a child is unparalleled, and we mourn with them. We too collectively sigh in relief in the knowledge that Julian will never again be in pain.

Those of us who knew Julian knew this: After spending any amount of time together you could be sitting at a red light two miles down the road, only to realize you are still chuckling about something he said. Julian had comedic timing. He understood the power of laughter and humor. He got that life should not be taken too seriously.

As a community, we have been reminded of what strength looks like. A fuzzy headed, blue eyed child that smiles through pain. A wheelchair bound boy in a baseball uniform with more team spirit than an entire stadium of screaming fans.

This past year, when dad Rich realized a dream of coaching Julian, our hearts couldn’t  help but do the wave upon seeing the pride father and son felt. But bragging is not their style. The Dunns are all about teamwork.

Some call it working a room, others call it magnetism. Julian had a gift. If you were near him, you were pulled closer. Not only to Julian, but to those 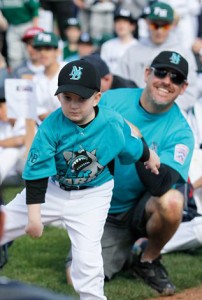 around you. He had the ability to make everyone he met feel like they were on the same team.

His generosity extended beyond his frequent charming smiles. Julian would high five anyone, anytime.

Like a bully relentlessly hurling insults, kicks, and punches, cancer plays dirty and follows no rulebook. Like the well-intending friends whose help sometimes complicates a situation, the medications had powerful side effects. The only thing never to weaken was Julian’s spirit. Julian became our coach, teaching us how to find strength when the scoreboard looked dismal.

But God knows Julian. And the angels were well prepared. The pearly gates were no doubt built of Legos – they knew he‘d get a kick out of that. And just beyond them, never was there a sandlot gang more excited to welcome a new player.

While our tears flow and our hearts hurt, Julian is enjoying the attention of those gathered around to hear the punch line of his jokes and riddles.

We all hope to say of our lives in the end, what Julian did with his: he hit it out of the ballpark. And before he did, threw cancer some curveballs for sure.