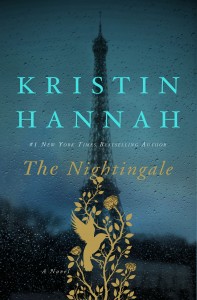 So asserts author, Kristin Hannah in her new book, “The Nightingale,” our Under Cover Book Club selection for April.

Chapter one opens with an aging woman going through her belongings as she prepares to leave her home and take up residence in a care facility. While taking a last inventory, she comes across a trunk that she insists, against the urging of her son, must come with her. Inside are memories of another life, lived on another continent during the time of war.

And thus, we are whisked back to WWII era France, during the Nazi occupation. The story revolves around two sisters: dependable housewife Vianne, and her younger, headstrong sister, Isabelle.

The death of their mother at a young age, and the subsequent abandonment by their father, has shaped the sisters in very different ways.

Vianne, who was a teenager at the time, sought out love from other sources. She became a wife at the tender age of sixteen, creating a new family for herself.

Isabelle, who was much younger, was sent away to a series of boarding schools, always finding a way to get kicked out, and forever craving the approval of both her father and older sister.

As war dawns on France, Vianne finds herself sending her husband off to war from their idyllic life in the countryside, sure that France will prevail, and all will soon turn back to normal.

Conversely, eighteen-year-old Isabelle finds herself given the boot from a final finishing school, and feels a primal pull to make a difference in the war effort, unwilling to stand by 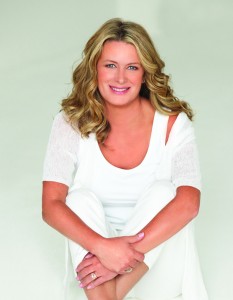 and watch her world fall even farther apart.

As it becomes clear that the war will not be a quick conflict, Vianne hunkers down at home, intent on keeping her daughter Sophie safe, while Isabelle becomes more and more involved in the resistance movement, taking risks that Vianne would never consider, and can’t abide.

Eventually, under the guise of running off with a lover, Isabelle leaves the security of her sister’s home, to do the unthinkable – guide downed RAF airmen on foot across the Pyrenees to safety in Spain.

As the war continues, each sister must evaluate what they are able to tolerate, and at what point, they will take a stand, regardless of the dangers it may bring.

It is clear to the reader that the aging woman from chapter one is one of the two sisters, but we aren’t sure which one, and thus while reading, we are unclear about what the outcome of each sister’s tale is.

I must confess – I began reading the book early, and at about 350 pages in, while captivated, I still do not know which way fate will look upon the pair.

Hannah says that she was compelled to write this book (a departure from her normal work) after reading the true story of a Belgian woman who led downed airmen across the Pyrenees at great risk to herself. She was struck by the stories of women who joined the resistance, hid Jewish children, and became saboteurs — many of whom paid the ultimate price.

She says: “As I researched, I found myself consumed by a single, haunting question, as relevant today as it was seventy years ago: When would I, as a wife and mother, risk my life, and more importantly, my child’s life, to save a stranger? That question is the very heart of ‘The Nightingale.’”

While I don’t yet know how either sister’s story will end, each is bringing to life the heroism that ordinary women showed during one of the darkest times in history, and theirs is a tale that I already know I will be sad to see finish.