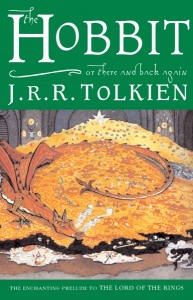 The kids went back to school this week, which not only explains the bags under my eyes, but also signifies the official start of the new year.

Last week, however while we were still enjoying the free and easy devil-may-care days of winter break, we were able to ring in 2013 all together as a family – a rare occasion when the family includes a teenager who usually has his own set of plans.

The kids chose the entertainment for the evening. Considering that our oldest is in high school and our youngest only in third grade, finding an option that every one will enjoy is usually a tall order as well.

This time, however, they did a great job by choosing dinner out, followed by a screening of “The Hobbit: An Unexpected Journey,” based on the book “The Hobbit,” written by J.R.R. Tolkien.

Prior to the last couple of weeks, none of my boys had seen any of the wildly popular movies based on Tolkien’s books. Truth be told, I hadn’t even seen them. But, as the release of the new movie approached, the boys’ cool Uncle Todd decided it was high time for his nephews to climb on board and showed them the first movie one evening while we were out.

In order to feed their new obsession with Middle Earth, and all things Hobbit and Elf, Christmas brought “Lord of the Rings” Legos, and three shiny new DVDs. After having watched all three movies during the week between Christmas and New Year’s, it seemed only fitting for them to close out the week by watching the latest film, which ironically takes place before the previous three.

With this new chapter, Hollywood has taken the book “The Hobbit” – Tolkien’s first in the Middle earth saga – and chopped it up into three chunks in order to facilitate the making of three films rather than just one.

In this first episode, we meet Bilbo Baggins, uncle of the well-known Hobbit from the first trilogy, Frodo.

The story follows Bilbo’s journey with a band of Dwarves and the wizard, Gandalf, as they try to reclaim Lonely Mountain and the Kingdom of Erebor, the Dwarves previous home. Along the way, of course, they must face many dangers, and overcome countless obstacles, not the least of which being the dragon who has taken over the kingdom.

As the credits rolled, and the boys realized they would have to wait nearly a year to see what happened next, a lovely idea dawned: “Let’s read the book!”

So, before heading home to watch the ball drop while toasting each other with sparkling cider and silly string the backyard, we made a pit stop at Barnes and Noble to pick up a copy of “The Hobbit.”

The younger boys (whom I might add, have excellent imaginations, and have created their own characters to add into the story) are excited to read the book aloud together, and see where this journey takes our group of adventurers.

Despite having older brothers who were Tolkien fans, I also do not know how the story ends, as I only ever made it through the first half of the book.  Hence, these pages will be a journey we first-timers will navigate together.

After all, there’s nothing like a couple of boys to awaken one’s sense of adventure, and make you appreciate a nice “Unexpected Journey.”

Edie is an avid reader and mother of three who resides in Newport Beach.  She can be reached at [email protected].