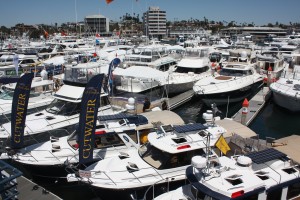 Next Thursday through Sunday, May 14 – 17,  is the 42nd annual Newport Boat Show in Lido Marina Village. Thursday the show starts at noon, the other days start at 10 a.m. The shows end at 7 p.m. each day, except 5 p.m. on Sunday, although experience shows many brokers and exhibitors actually start wrapping up earlier on Sunday so don’t wait until late Sunday.

More than 200 boats will be on display, and exhibitors on shore showcasing products and services.

Among the many boats to be featured is one by Cranchi, a European yacht builder dating back to 1870. They usually feature fast power yachts with superior interiors, but this has changed. Their 45-foot Cranchi Eco Trawler with a 14-foot beam weighs 26,500 pounds, so this very light trawler will really save on fuel. Twin Volvo 260-330 diesel engines will allow a quicker than normal cruising speed; a narrow beam will support that fact.

Many powerboats are featured in the 400,000 square feet of display space. The Jeanneau Velasco 37F will have its debut. The Hampton Endurance 72 Skylounge is a great cruiser and the Martimo M50 has an enclosed fly bridge and is noted for fuel efficiency. The Ovation 52 Sport Sedan has three Volvo I.P.S. engines for power and the 98-foot Queenship Acero Azul has a sportfishing style also known as a convertible. Horizon will feature a new V80 at the show.

There will be shuttles on weekdays at the Newport Harbor Lutheran Church at 780 Dover Dr. and on Saturday and Sunday at Hoag Health Center on Superior Avenue. This will save a $20 fee at the Lido Village Parking Structure that is more than the cost of an entrance ticket.

I’d like to pass along for our readers who are boaters two businesses I recently used that stand out above the norm with experience and superior service.

Brower Davit Systems and Furling and Rigging, (both in Costa Mesa), exceeded my expectations. Brower passed me to Furling and Rigging for replacement of the davit wire rope and offered to weld the new end for no charge. Furling and Rigging charged a fair price and said I could pick up the new wire the next day, even though they obviously had a back log of work. Two hours later they called to say the wire was serviced and come and pick it up. Great service should be commended!