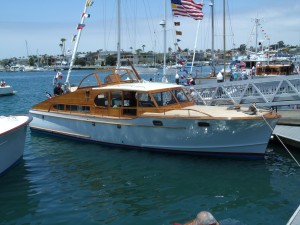 That is the one word to me that describes the Wooden Boat Festival that I attended at the Balboa Yacht Club several weeks ago. The location, booths, support staff, program, shuttles and the yachts (small to big) were very impressive. I’ve attended scores of boating events over the years, and I don’t think I’ve ever used the word “superior” to sum up an event such as this. 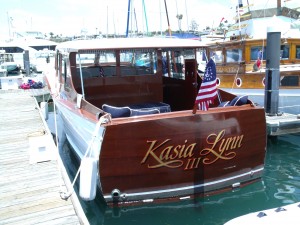 time to leave there was one unloading which departed in less than three or four minutes. Past events I’ve attended, shuttles would come and go every half-hour or when they would fill, which could be every half-hour.

Staff was everywhere, from the club entrance at a program table to throughout the location. They were energetic, helpful, and happy souls. What a delight!

Adjacent to the clubhouse were a dozen or so wooden trailer boats, some new, some old, that brought back many childhood memories of sailing inside and outside Newport Harbor. 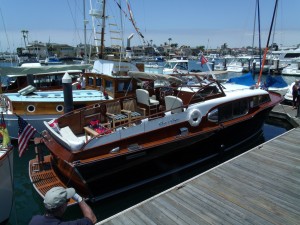 An 18-foot Thistle built in 1959 with a gloss-black hull and varnished mahogany insides, was identical to one owned by B.Y.C. member John Cazier in the 1950s and crewed with my Dad before his new career in real estate that consumed his weekends for the next 45 years.

I was seven at the time, then raced sabots for a few years, and then skippered the same Snowbird for three or four summers. The youth sailing programs at all our local clubs are an excellent way to sail, race and consume 30-50 hours a week of young folk’s time in the summer. I can’t think of a better way to grow up in our Harbor area.

There were many other larger sailboats and power boats, some with a local history, that were beautiful and well maintained 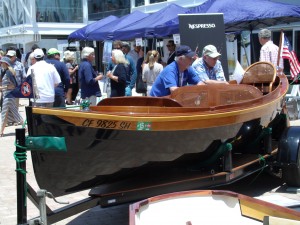 by their owners. As one could imagine, the work involved to keep up these yachts are in the hundreds of man-hours annually which is why, before fiberglass became common, only the wealthy owned yachts.

At the Festival local boaters and businessmen Bunker Hill and Steve Farwell, showed a 42-foot Colnett which they brought to Newport Harbor in 2007. She was built in 1942 in L.A. Harbor to sport fish out of the Tuna Club in Avalon, Catalina. Naturally, there are a few upgrades, but the varnished teak fighting chair on the stern and the varnished mahogany cabin, inside and out, certainly reminds one of yesteryear.