It started out like any sunny day in Newport. Little did I know how it would end.

As I left a lunch meeting, I cheerfully walked to my car, mentally moving on to my next appointment. But as I inserted my “key fob” instead of the reassuring purr of the car engine, I was met with utter silence.

Uh-oh.  Houston, we have a problem. 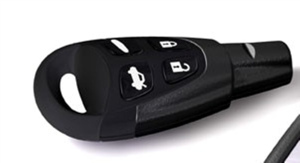 I examined the fob closely. “Surely you jest” I said to the key. I tried again and again to start the car, to no avail. It was undoubtedly dead in the water.

Thinking the fob probably just needed a new battery, and knowing that I had a spare at home, I was slightly irritated at the inconvenience but nowhere near panic. My hubby picked me up and we went back to the house to find the spare.

Or so I thought.

Nothing.  Nada. Was this a cruel joke?  Why was the universe torturing me so? The situation was becoming truly uncomfortable. Panic started its slow, tortuous creep. We all have one of “those days” now and then. This was starting to look like it was destined to be mine.

Things only got worse after I purchased a new battery for the key I did have. Upon reassembling the key, it somehow broke, and when we went back to try it were met with the same deafening silence. Murphy’s Law was in full throttle. The car would have to stay in the parking lot until morning.  I had to find that spare!

With the original key rendered useless, everything was now hinging on finding the extra fob. I wracked my brain and practically tore the house down to its frame searching. I felt like I was going mad, how could this be happening?

My husband, by this time thoroughly disgusted with the whole ridiculous situation (I couldn’t blame him), got on the phone with Saab and found that a new key fob could be had, but it would require the CIM (Computer Interface Module) be replaced since without a spare fob the new fob could not be reprogrammed without a new CIM. They said they could have it done the next day, and it would only cost us about $1,000.

That straw broke this camel’s back. There was no way I was spending $100 on a new key much less a $1,000!  Panic turned to determination; I was going to find that key come hell or high water. The car sat in the parking lot for another night as I turned over the same pillows and looked under the beds for the fiftieth time. I even looked in places that seemed ridiculous, the dishwasher, the dryer, my untouched-for-months golf bag. I wracked every last brain cell in search of that &^%#! Saab fob.

Three days later, we reluctantly had the car towed to the dealership. As promised, the next day, I became the proud owner of a $1,000 fob key. I wanted to crawl under a rock. Surreal doesn’t even begin to explain the experience.

But life went on, and I began to get over it. Until …

A few months later, changing our big comforter, I stuffed my hands to bottom of the foot board and felt something hit my thumb. I grabbed the item and looked in amazement. There, low and behold, was the old fob. I can’t explain the feeling that welled up inside me, it was somewhere between laughing hysterically (yes, in that crazy lady kind of way), or bursting in to tears.

One would think finding the old key a good thing. Now we had an extra after all. But alas, it was rendered totally useless thanks to the new CIM. A new extra fob programmed to match the new CIM would cost another $300. I threw the old key in my jewelry box and decided to go about life without a spare fob.  Until …

About a week ago when my husband used my car to run a few errands. The next morning, when I asked for the fob, he couldn’t find it.  I took our other car and left him searching.

Upon my return, looking frazzled, he told me he must have thrown the fob out with a pile of junk mail the day before. I wasn’t convinced, that is just not something he would do. I had a gut feeling that the $1,000 Saab fob was still in the house. But where?

It was like “Groundhog Day” all over again. We searched high and low. No key fob. I began to wish we had purchased the $300 spare. We called Saab again, but they confirmed we were back at square one, since the CIM had been replaced the old key we did have was no good. We were potentially looking at yet another $1,000 expenditure.

I kept searching. Finally, a day later as we were about to give in and make the dreaded return to the dealer, I reached in a coat pocket and found the fob.  The mystery was solved! I’ve never been so relieved.

I’m not exactly sure what the moral of this story is. Perhaps that we should all be sure to take good care of our spare fobs? Or perhaps in their zeal to design cars with uber-security CIMs, automobile manufacturers alienate their customers when fobs must be replaced?  Or that sometimes in life “stuff” just happens, not once, but sometimes even twice? (Well, almost.)

What I do know for sure, I completely get why gas stations attach their restroom keys to big, ugly pieces of wood.

Lynn Selich resides in Newport Beach. She can be reached at www.LynnSelich.blogspot.com.