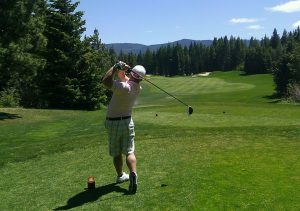 This past June, golf fans the world over speculated whether or not Tiger Woods would participate in the U.S. Open, one of four major championships bringing global attention to the sport.

Had he recovered from the spine injuries that have kept him largely out of competition since 2014? Would he participate?

When the legend officially withdrew on June 7, the announcement on his official blog made it clear that he was “not physically ready to play.”

Whether you’re a casual observer, avid armchair fan, weekend warrior or promising golf pro yourself, you’ve seen the footage: Woods’ unmistakable grimace as his swing is punctuated by pain, and his agonizing walk from the green.

How does it come to this? How do golfers suffer back injuries? More important, what are the best ways to avoid them?

For answers, one must first consider the anatomy of the swing.

A typical golf swing involves twisting the body down at the trunk, a motion that inherently stresses the spine’s discs and fibers.

From that initial set-up stance to the takeaway, downswing and follow-through, the spine is put through a range of motions that are further impacted by grip, ball position and tempo. The wrong combination of motion and form may result in painful spasms in the core muscles.

If muscle spasms have already been ruled out, the most common golf-related injury is an annular tear, where the tough exterior of an intervertebral disc is torn, impacting the shock-absorbing cushion between the vertebrae.

An annular tear, if further aggravated, may progress to a herniated or ruptured disc, which is where the real trouble starts.

When a disc is herniated, the gel at its core—called the nucleus pulposus—seeps out of its protective casing and begins irritating the nerves, often causing nerve compression, in which the initial back pain radiates down into the patient’s leg.

Even the healthiest golfer can suffer back injury as the spine endures repeated strain due to overuse, but most injuries occur when a golfer fails to keep his/her core in shape or is unable to exercise proper form on the course.

Add exhaustion and/or emotional stress to the mix, and you have a veritable recipe for injury, whether you’re a novice or a pro.

To avoid spine injury on the course, the most important thing a golfer can do is build a strong core—that is, to strengthen the muscle groups that include the abdominals, sides of the trunk, pelvic floor, back, buttocks, hips and pelvis.

As the American Council of Exercise describes it, core muscles act as dynamic and isometric stabilizers for movement and assist with the transfer of forces between the upper and lower body. Because these same forces come into play during every single golf swing, core stability is essential in helping to protect the spine and prevent injuries. The golfer’s fitness program should include a regimen of exercises designed to strengthen and maintain core muscles.

The second key in preventing golf-related spine injury is all in the form (a recommendation undoubtedly more relevant to those new to the sport, but always a good reminder).

Perfecting form in any sport takes time. Golf is no different. Those who take the time to break down their swing mechanics, work with a coach and even videotape and study their movements will have a much easier time correcting those mistakes that could spell injury—and poor performance—on the course.

Finally, ALL golfers—novice and pro alike—should learn to listen to their bodies before pushing themselves too far. Anyone who is too stressed, too tired or too early in their recovery from previous injury is at a greater risk for injury, and that’s not just the spine.