Produced by EliteOC Productions, the evening began with a cocktail reception overlooking the rolling hills of the Pelican Hill golf course, followed by a gourmet dinner and program inside of a transformed tent that was adorned with elegant décor and chandeliers suspended from the air.

“I was told that this year we were going to hold our gala in a tent. I was horrified,” Alzheimer Orange County’s CEO and President Jim McAleer told the crowd of 300 supporters. “I got here today and almost had a stroke—what do you think of this tent?” 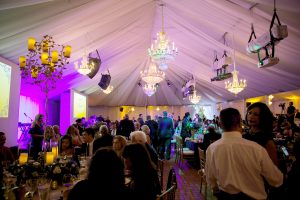 Guests participated in silent auctions via mobile bidding, and live and fund-a-need auctions during the program. The gala raised more than $387,000, with 100 percent of all funds raised staying in Orange County to support AOC’s no-cost care and related programs and services, as well as expand its direct care services to provide additional support for the 84,000 local residents who are currently battling Alzheimer’s disease and other related forms of dementia.

“The success of this year’s gala is a reflection of the community’s unwavering support of our organization,” said McAleer. “The funds raised will allow us to continue our pursuit of new initiatives that will provide even more support to those affected by Alzheimer’s in Orange County.”

McAleer talked about having memories as a kid watching a Glen Campbell TV show with his grandmother, who had Alzheimer’s. He then introduced the evening’s special guest, Kim Campbell, wife of country music legend Glen Campbell, who was diagnosed several years ago with Alzheimer’s.

Kim Campbell talked about the documentary “I’ll Be Me,” which chronicles Glen’s journey with the disease as he embarked on a final world tour.

“It’s one of the funniest films you’ll ever see,” Kim told the audience. “My husband is innately funny. He took his diagnosis in stride and continued to live his life. We were blessed to have an early diagnosis—it gives you that time.”

One thing the film did not show, said Kim, was what happened when Alzheimer’s finally took its toll on Glen and he went downhill rapidly.

“It affects the ability to think and reason,” noted Kim. “Glen can no longer speak, he does not understand a word anyone says. Glen is content and cheerful, and in his own little world right now, and I am heartbroken.”

Kim talked about being Glen’s constant caregiver until she had to bring him to respite care. Now, he is in stage six and under constant care. She praised caregivers and all they did for their loved ones.

During the program, several individuals and organizations were recognized for their outstanding support of AOC throughout the years: Charles Antis, Antis Roofing & Waterproofing; Judicate West; Michael Lancaster and Frank Carfioli; Wayne Poon, Ph.D.