I’ve been a fan of Marin and Noah von Blöm since the duo opened ARC followed by Marin in The OC Mix/SOCO in Costa Mesa.

ARC features food cooked either over a wood-burning stove or a wood-fired oven. Wood is stacked outside the restaurant, while inside the glow of embers and sounds of sizzling cuisine remind diners that this is no ordinary restaurant. Their hamburger is legendary, their cocktails divine.

Marin and Noah have brought that same sense of creativity to their latest adventure, ARC Butcher & Baker in Cannery Village. 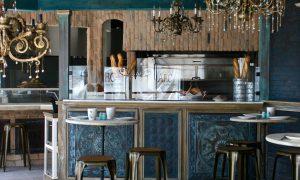 The restaurant opens today so I have not had a chance to visit and taste, but here’s what I know:

ARC Butcher & Baker focuses on ready-to-serve family-style dinners, offering several take-home options ranging in price from $50 to $75 which can feed up to four. The dine-in menu features toasts, salads, “streetwiches,” and classic entrees including a Baby ARC Burger, Steak n’ Potatoes, and Southern Fried Chicken & Biscuits as well as a curated list of beer & wine available by the glass.

Breakfast favorites from Restaurant Marín, the couple’s modern-day diner which closed two years ago and then reopened as ARC Pizza House, have reportedly been reimagined into mainstays on ARC Butcher & Baker’s menu.

“ARC Butcher & Baker embodies the spirit of California with dishes that strike a balance of simplicity and sophistication,” said Chef Noah, who by the way was named Chef of the Year at the 2018 Golden Foodie Awards. “Our family-style offerings allow locals to pick up ready-to-serve dinners featuring Americana classics and enjoy them with ease from the comfort of their own homes.”

As a full-service bakery, ARC Butcher & Baker bakes a variety of artisan bread for local restaurants as well as for the von Blöm’s other establishments.

The Lido Village and Cannery Districts have had a resurgence in popularity over the past several years, thanks in part to people like Newport Beach native and local developer Scott Burnham, founder and CEO of Burnham USA. Burnham worked closely with Noah and Marin to bring their new concept to his building in the Cannery District.

“I’m incredibly excited about ARC Butcher & Baker’s opening in Newport Beach,” says Burnham. “I’ve had the pleasure of working with Noah and Marin – who are a world-class chef and restaurateur team – for years, as they opened their first concept, ARC, at our SOCO development in Costa Mesa. They have the vision and the experience to make ARC Butcher & Baker an instant success in Newport.”

The restaurant offers indoor and outdoor seating, but it’s an intimate spot with seating for 20 guests. ARC Butcher & Baker is at 417 30th St. on Balboa Peninsula and is open daily from 7 a.m. to 9 p.m.