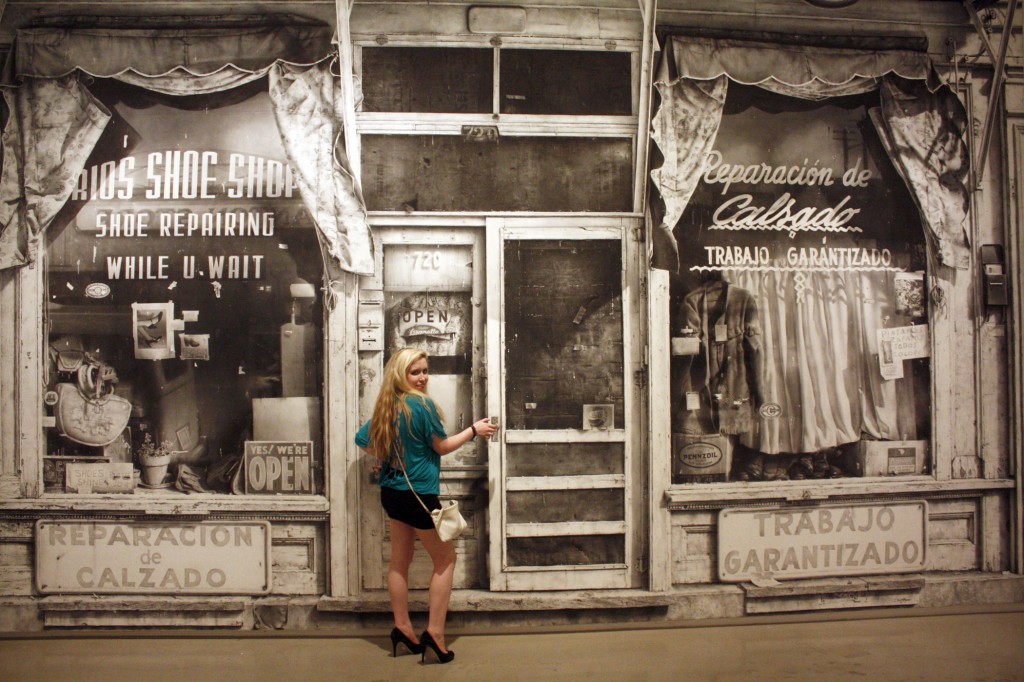 It’s not unusual for a son to take after his father and share the same occupation. However, the fascinating father and son exhibition, Sarkasian & Sarkasian, on display at the Orange County Museum of Art through July 27, shows how different one family’s art can be. 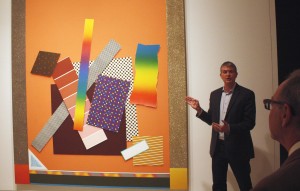 OCMA Interim Director and Chief Curator Dan Cameron selected 23 video sculptures by Peter Sarkisian along with 22 paintings by Paul Sarkisian with the idea of developing some sort of theme between both artist’s works.

According to the press material, Paul has been an accomplished and dedicated painter for six decades, while Peter studied film directing at Cal Arts and has produced video installations since the mid-1990s.

Within an exhibition layout in which an equal amount of attention is paid to each artist’s work, a connection between the two bodies of work emerges in what Cameron called “the shared artistic device of trompe l’oeil, whose translation is ‘fool the eye.’”

“Sarkisian & Sarkisian is an interesting look at two artists who each have their own distinct approaches,” said Catherine after our visit to the exhibit. “Peter Sarkisian uses video sculptures to create an experience for the viewer that forces you to be present in each piece.”

“In contrast, Peter’s father, Paul Sarkisian, created paintings that are so realistic and detailed that I had to really look to make sure they weren’t photographs,” she continued. “In one 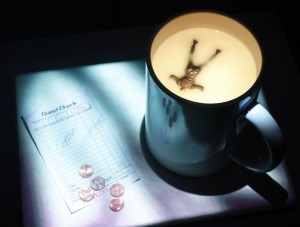 “I was fascinated by many of Peter’s works and the way he integrated bits of video into static artworks, such as the tiny figure crawling out of an ink well onto a piece of paper, or the body floating in a coffee cup,” noted Christopher. 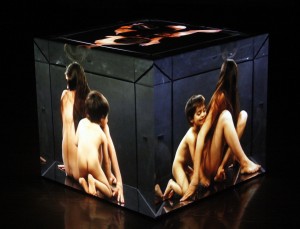 “One of my favorite pieces of his was “Dusted,” stated Catherine. “It shows a medium sized-cube that has a video projected on it of a nude mother and son who appear to be stuck inside the box. You can watch them shift around within the space, which causes dark streaks to appear on the walls. The shadows help to create a barrier to the stark nudity of the people in the cube and leave the piece as something artistic versus vulgar.”

“I also liked how the video started in super slow motion, then gradually increased speed until the figures were hyper-fast and then disappeared,” added Christopher. “Cameron was right when he talked about fooling the eye. I’d equate Sarkasian & Sarkasian with watching magicians Penn & Teller at work: different styles that achieve the end result of fooling – and delighting – the eyes.”