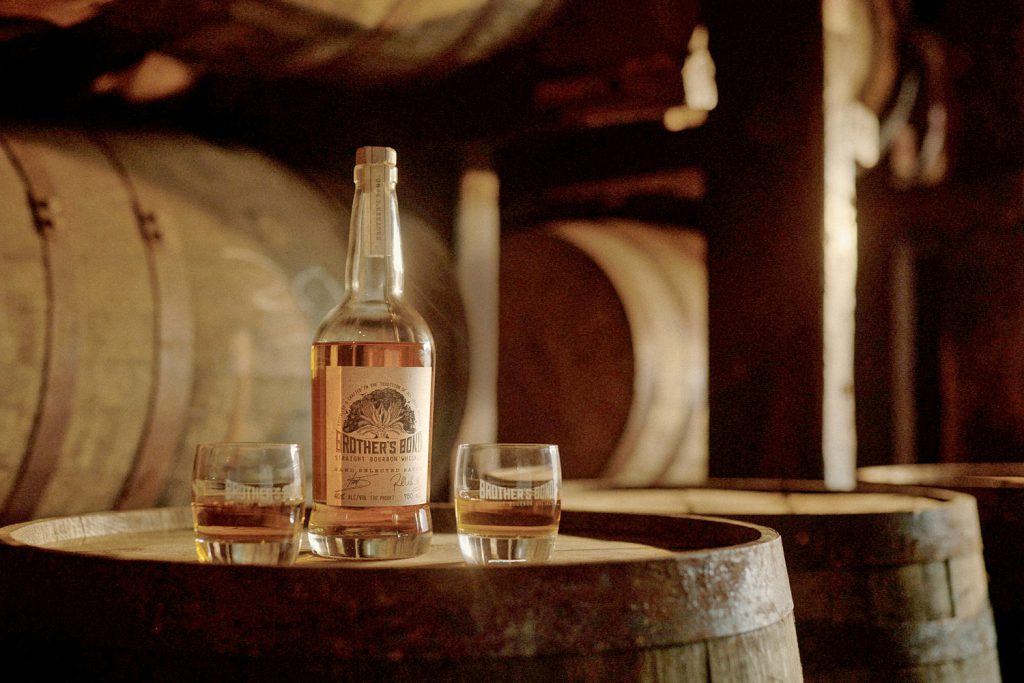 By Simone Goldstone | Special to the NB Indy

Want to help the environment? Simple: pour yourself a cocktail.

Brother’s Bond Bourbon is a bourbon line dedicated to regenerative agriculture. It was created by actors Paul Wesley and Ian Somerhalder, who starred in “The Vampire Diaries,” which ran for eight years on the CW. The show was based on the books of the same name, which were written by Orange County author L.J. Smith. Wesley and Somerhalder played brothers Stefan and Damon Salvatore.

Inspired by their friendship on-screen and off-screen, the actors launched Brother’s Bond Bourbon, an award-winning bourbon whose proceeds go to regenerative agriculture and reversing climate change. Their cause is paramount in aiding the devastated ecosystem of our marine creatures. And it tastes delicious, which is why Brother’s Bond Bourbon is my drink of choice this summer.

Somerhalder, who is a UN Environmental Programme Goodwill Ambassador, has been connected to nature his whole life. Raised exploring the unique outdoors of Louisiana, Somerhalder’s parents instilled the importance of caring for the environment at an early age. In 2010 the actor launched the Ian Somerhalder Foundation, which aims to conserve natural resources by advancing science. His business partner and on-screen younger brother, Wesley, is vegan and has spoken out against factory farming on a multitude of platforms.

“Working with Kiss the Ground Foundation (a Los Angeles-based nonprofit on a mission to awaken people to the possibilities of regeneration and inspire participation in this movement) really opened my eyes to how Paul and I could support the environment with Brother’s Bond as a company,” explains Somerhalder, “I learned through working with the organization about how regenerative agriculture can be the future of climate control, promoting sustainable and regenerative practices up and down the supply chain.”

Industrial agriculture is almost entirely dependent on oil for cultivation and pumping water. Regenerative agriculture focuses on restoring the natural healthy balance of the topsoil. The move towards funding sustainability with each bottle of Brother’s Bond Bourbon is a step towards ensuring the seals and dolphins who share our coastline won’t be suffering from oil-related incidents in the future.

Brother’s Bond Bourbon is smooth and warming, with 22 percent rye on the bill for spice and floral notes. With sweetness from the corn, depth from the rye, wheat for soft texture, and barley for nutty caramel notes, the balance has made the brand one of the fastest selling whiskeys ever. 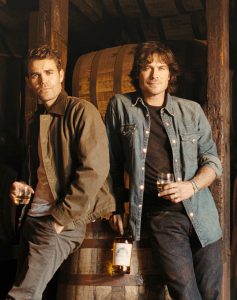 This is a drink intended to be enjoyed among friends and family, and the bond formed by Wesley and Somerhalder from playing on-screen brothers for nearly a decade is at the heart of it all.

“I met Ian while getting our ‘fangs’ fitted when we first started ‘The Vampire Diaries.’ I wasn’t feeling too confident about the show taking off until I saw how optimistic Ian was. That day, we shared a drink and toasted to the success of the show. Since then, we kept up the tradition of grabbing a drink after a long day of shooting,” Wesley shared.

Somerhalder was raised with the idea of enjoying drinks amongst loved ones. “It was never about the alcohol for me; it was always about family. Back when I was growing up in Louisiana, my French grandmother used to sneak me a little spoonful of wine every now and then at the dinner table. I also got to witness my family get together to drink mint juleps after church every Sunday.”

A native of Louisiana, Somerhalder faces the challenge of promoting climate change relief in the South. Because bourbon is such a symbol of Southern culture, the drink is the perfect antidote to introducing sustainability.

“The second you mention climate change, people shut down for two reasons. Climate change is such a daunting task and makes us feel like we have zero control. The other way they shut down is from a political standpoint, where people just don’t wanna hear it. They don’t believe in it, or it doesn’t align with their political affiliation,” the Bayou-born actor reveals.

“The way to circumnavigate all of that, is to make it about sound economics. Regenerative agriculture yields greater profits because it requires less inputs. Inputs go down and yields per acre go up. Higher yields means more money for farmers, building farmers prosperity, which brings farmers off of government subsidies, better communities, higher tax base, better schools, better water, better air, and the list goes on and on. No one can argue with that. And that’s the beauty of regeneration. Offsetting climate change is simply a positive secondary plus.” 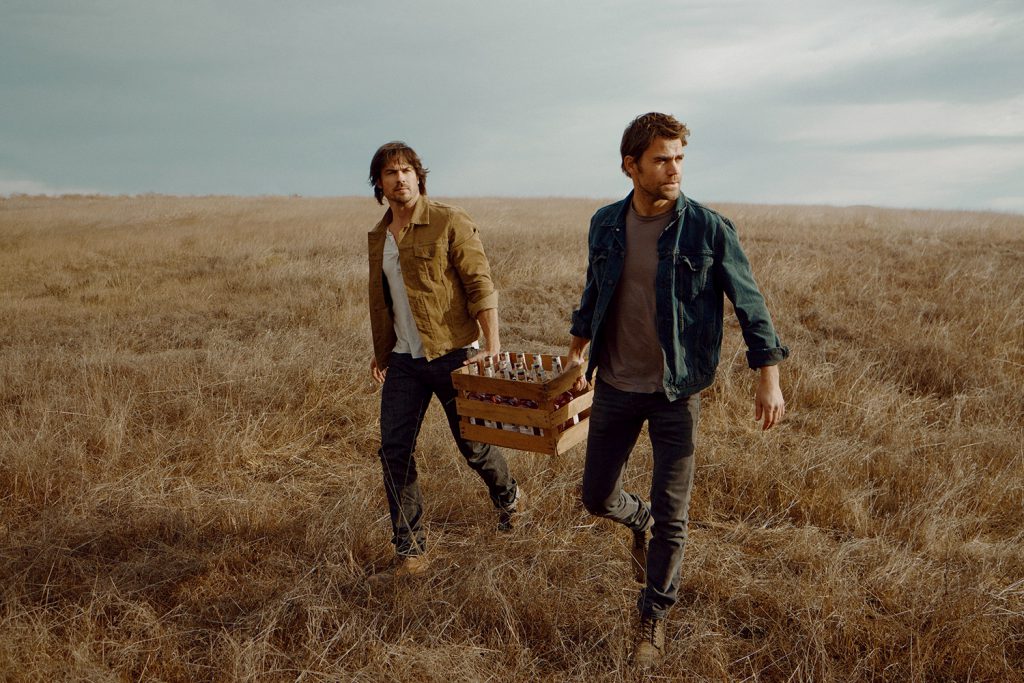 Aside from the serious environmental benefits, the brand also has the prominence of its beloved creators. In the spirit of drinks, the actors exclusively shared stories of their 21st birthdays that fans will love.

“My 21st birthday was spent in such a fantastic, elaborate, and amazing way,”

Somerhalder recalled. “I had shot my first TV pilot in April the prior year, but the show was not getting picked up and I was quite sad about it. I was studying acting in New York with Bill Esper and busting my ass to survive on what little money I had saved from modeling and commercials. I was pounding the pavement, I was auditioning almost every day, and I was working so hard.”

Somerhalder noted that many of his friends at the time were successful photographers, art directors, and stylists that came from Wall Street and decided to get into the fashion business. They were all incredibly successful with sprawling lofts in Soho. Some of them got together and concocted a plan to cheer him up and turn NYC into a playground for his 21st birthday.

“A very dear buddy came over to my apartment in the West Village in the morning to cheer me up with a coffee and a brioche. He mentioned to me that once the sun fell, we needed to go and have a great dinner, and dance the night away. I had to be incredibly conscious and tight with the cash I had, so I said that I’d rather just stay in bed and watch a movie. He convinced me to come to Soho. As the sun fell, I meandered out of my apartment to the cold December streets. As I walked down Green Street past a giant beautiful limousine, I was thinking how nice it would be one day to get that car for my friends and crush the night, when two people jumped out of the limo, grabbed me laughing, and literally threw me in!”

Turned out his friend had planned an epic, unforgettable night. The details will remain untold, but, said Somerhalder, “let’s just say we all had breakfast the next morning together having never gone home. It was one for the memory books for sure.”

In contrast, Wesley – with his sardonic sense of humor – said “Sadly, I have no recollection of my 21st birthday, but from what I remember someone threw me a surprise birthday party. I’m not into surprise birthday parties or birthday parties at all. Too much attention. So, I recall being a bit embarrassed about the whole ordeal.” Despite his segue into the years of legal drinking, Wesley has managed to co-create the most followed alcohol brand on Instagram.

In a mixing glass, add the sugar cube and coat it with the bitters. Muddle the sugar cube with a cocktail muddler or wooden spoon until mostly dissolved. Add the bourbon whiskey and fill the mixing glass with a handful of ice. Stir until cold.

Rinse a lowball glass with absinthe and discard excess. Strain the drink from the mixing glass into the lowball glass.

Use a knife to remove a 1″ wide strip of orange peel. Squeeze the orange peel into the drink to release the oils. Gently run the peel around the edge of the glass, then place it in the glass and serve.