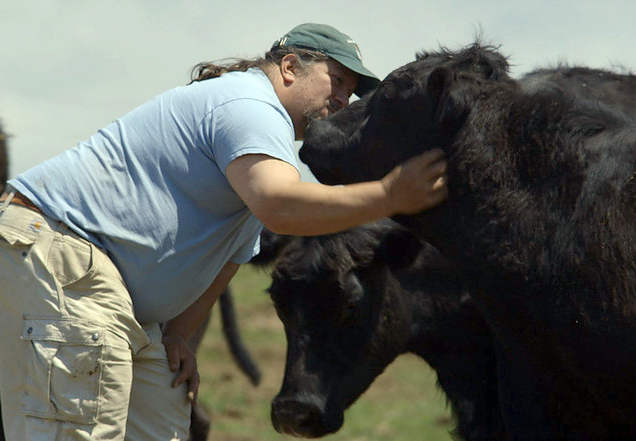 As a long time health fanatic that has understood what is at stake for our health and well-being, from our community to our nation, I was a relieved to learn a movie about farming, “The Bullish Farmer,” made it into the film festival.

My editor, connoisseur of all foods great and small, felt it important for us to make readers aware of this documentary and the issues we face with our food. See this film and learn what needs to happen if we want our children and our children’s children to live healthy lives.

It all begins on a farm. My generation growing up in the suburbs read about such places set out in the country where cows and pigs lived and farmers worked the land so all of us could eat.

It was a fairy tale picture, outside the realm of the concrete jungle we lived in. I remember one time in grade school when we had real live Jersey cows trucked in for us, lined up on our grass field so we could actually see and touch the real thing.

“The Bullish Farmer” brings back that reality, and awakens the deep connection inside our souls through incredible shots of farm life. Through the eyes of director Ken Marsolais we are shown the real deal with John “Boy” Ubaldo, a former successful Wall Street investment banker turned farmer who realized his methods of farming are not accepted.

From the start of his new venture, Ubaldo knew deep down inside he could not work his farm the way many small farmers have been forced to do. What he didn’t know is how he would become an activist, lobbying for GMO labeling, animal rights, the preservation of crop diversity and the reduction of chemical fertilizers in order to help preserve small farms in rural America. 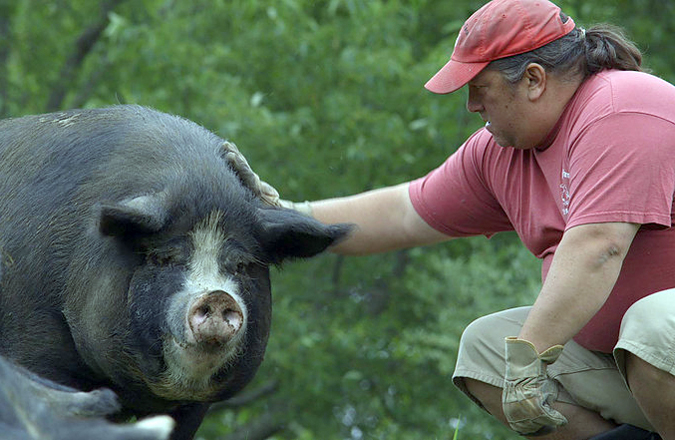 It wasn’t until he had left Wall Street did he understand how toxic our food system had become and exactly how much we are being poisoned every single day.

Despite the shocking reality the movie brings to light, it still gracefully moves the viewer through a narrative filled with beautiful visuals of Ubaldo’s countryside farm, the animals (cows, pigs, chickens, ducks, geese and guinea hens), and reveals the deep personal connection this committed farmer has to it all, with his mission to provide good clean food for family and community while worrying about big agricultural companies, better known as Big Ag, taking it all away.

Ubaldo states in the film, “Big Ag today is a business model. It’s not about ensuring good, clean, healthy food. It’s about increasing profitability and shareholder value, at the expense of human health and animal welfare and the environment…small farms in this country that provide good clean food, are all under assault.”

All through the film, we are given tidbits on why it is necessary to make a change and let big agricultural companies with their GMOs and pesticides and unsustainable farming methods dwindle away.

Ubaldo confirms that “right now the only way to get good clean food without all the crap is to buy it from a local farm.” He goes on to say a lot of countries are still dominated by small farms with the farmers market still the center of town life. I agree that he is right; this is what we need to get back in order to really make a change.

There is a great quote in the film, “We have more power than any other corporation because we have a wallet. And if we were all activists with our wallets, the amount of change would be dramatic.”

The quiet, yet firm tone throughout the film matches Ubaldo’s unwavering tenacity. And like the film as it moves gently from one seen to the next, you see how he and other rural farmers are tackling the influence of Big Ag one day at a time.

“The Bullish Farmer” screens on April 24 at 7:30 p.m. at The Triangle Cinemas in Costa Mesa. Visit NewportBeachFilmFest.com for more information. 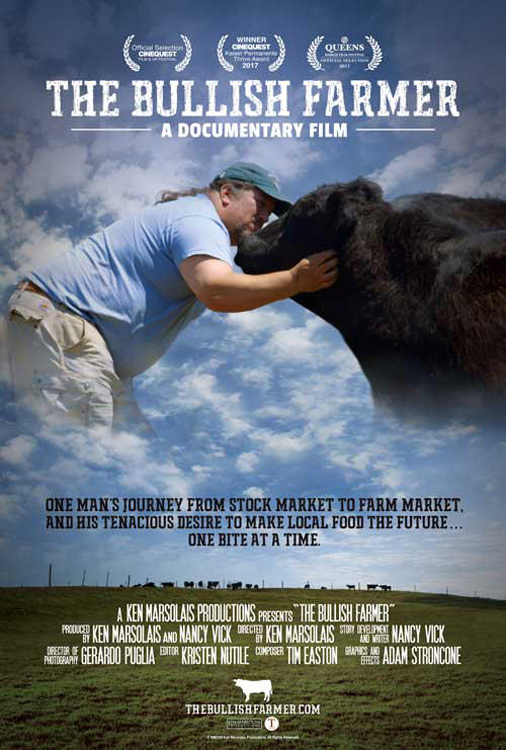 INTERVIEW WITH THE FILMMAKERS

Filmmakers Ken Marsolais and Nancy Vick were gracious enough to give us some personal remarks to questions about their film.

What was the “aha” moment that motivated you to make The Bullish Farmer?

Marsolais: I had met John once before at a fundraiser for a local non profit organization. Several months later I was at a Farmer’s Market in a local community and saw this long line of people with kids waiting to buy meat and produce from John Boys Farm. I recognized John and hung around to see what the excitement was about. I listened to the people wanting to discuss the sourcing of the food and his farm. I was amazed to see how he listened to them and responded. He clearly was a person who was passionate about what he was doing and I immediately thought this was an interesting human interest story and something that I could possibly tell. I had no idea where it might take me but decided to pursue it with him. It took some convincing

How is the film similar or different to other films you have directed?

Marsolais:  This film is similar in that it focuses on issues that affect our lives. I previously have worked on films that have dealt with children with extreme disabilities and also one that focused on children with cancer. With The Bullish Farmer, our focus is also to raise awareness on an issue that is critical to everyone’s existence. The difference, it’s more political than the others and seems much broader in its message. It is an urgent call to action.

Why produce a film like this? Will people really listen?

Vick: The negative consequences of GMO technology are becoming increasingly clear, but it is a very hard story to digest, or even accept, especially upon first hearing it. And once it is realized, it can be hard to incorporate into daily life habits. Even in this day and age, we are unwittingly being used as guinea pigs for these big corporations, at great personal health risk.  There is a need to tell this story over and over in many different ways in order to push forward the process of knowledge, acceptance and change in people’s lives.

There is an impressive body of work out there documenting farming and food. Our goal was not to become the newest cutting-edge scientific film about GMO’s with lots of tables and charts and talking heads. These things all serve a valuable purpose and of course we wished to reinforce those messages in our film. We hoped that by focusing the film more on John Boy’s personal journey and evolution, we might be able to reach a different, perhaps slightly broader audience. Some people glaze over with facts forced on them. Our story goes about it in a different way. The Bullish Farmer unfolds in a more gentle way by following our protagonist as he tells the story about falling in love with his farm and animals while he is forced to confront the realities of food and farming today. We want people new to the cause to be able to absorb vital information easier; and reaffirm the message for those already familiar with the cause. Ultimately, the film brings to light changes in farm policies that need to be made and how people can take action in their personal lives to eat healthier.

What part of the film do you think will inspire people to change?

Marsolais:  The telling of a story of one person’s passionate and compelling journey to promote good health through farming practices that have worked for generations, all before we started to infest our food with chemicals. We hope we can inspire and convince through our film the urgency and vital importance in supporting small farms and the farmer’s who struggle to keep them in our culture.

Do small farms actually have a chance?

Vick:  Not only do I believe small farms have a chance against Big Ag, I believe that the world will be in deep trouble if we do not reorient towards small farms. Small farms have always fed the world.  In many countries, they still do.  And, with increasingly conscious consumers and with reworked farm policies and subsidies, they could still feed this country as well.

The Big Ag business model is beginning to implode.  Folks are waking up to the horrors of confined animal feed operations. As citizens of the sickest industrialized country in the world, Americans are seeing daily all around them their own health and that of their loved ones deteriorating. They are beginning to question and understand the negative health implications of processed foods made with untested GMO ingredients. And they are hearing more and more about the reality of this technology. Yields have not increased and there has been a dangerous, geometric increase in the amount of pesticides required to sustain GMO crops, as superbugs and superweeds adapt and proliferate. Therefore, with two biggest promises for GMO crops broken – increased yields and decreased pesticide use – Big AG is now under serious and sustained attack from many angles, and this effort for small farming is beginning to make a real difference.

What can viewers do to help rural farmers?

Vick:  If consumers continue to demand more organic, non GMO food, change in policies and production will happen. We are already beginning to see this in stores and in legislative efforts across the country. I think that one of the best ways to help rural farmers is to become informed, make a commitment for real change in your buying and eating habits, stay out of the supermarket as much as possible, try to buy both locally and in season, and get to know your farmer!  Take part in CSA’s (Community Supported Agriculture) is an enormous help to farmers. And teaching your children the importance of food choice creates an informed future market for small farms.

How has directing and producing films that change people’s lives, changed yours?

Marsolais:  With each film brings a new experience to me of how many people around us deal with human issues that dramatically affect their lives. It helps me keep a balanced perspective on my own life and how fortunate so many of us are, in spite of what we might think. To know you can never do enough to help others; and to listen because we all have a story to tell.

How has this film changed your life?

Vick:  On a cosmic level, doing this film has changed my entire orientation to the world in which I live. I now speak of GMO’s as being my “gateway” issue into understanding the world. For me, I’ve researched and read and experienced all this new information and have had a very hard time absorbing it as real. And then when it really sank in, I began to see that nothing is as it seems. I realized that if this is going on, which I never could have imagined, well then, what about all these other issues that have a lot of smoke swirling about them? As crazy as it might seem when I considered the truth of other contentious issues, I now realize that there’s enough to merit investigation. And it may all be proven right, as incredible as it may seem.

On a more practical level, of course, it has also changed my entire view of eating, health and food! It has made me realize that we must be our own advocate in understanding, protecting and maintaining our health. Farming and food are at the heart of that quest.