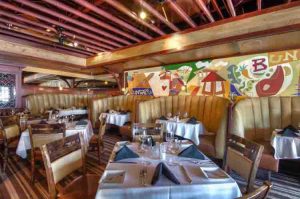 Diners can enjoy The Bungalow’s Restaurant Week menu through February 28. The special $40 and $50 dinner menus (depending on entrée) is offered Sunday through Tuesday nights, while the $20 lunch menu is served Monday through Friday. 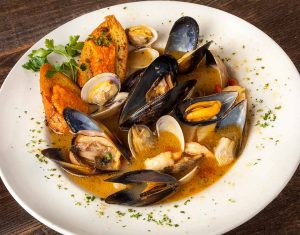 Bluewater Grill’s “From Europe with Love”

Last month, I enjoyed Bluewater Grill’s France versus Italy battle (bouillabaisse versus cioppino), but apparently everyone else did too, because the restaurant is extending it through February.

However, instead of a culinary battle, the February special is a more civilized romantic exploration of France and Italy. 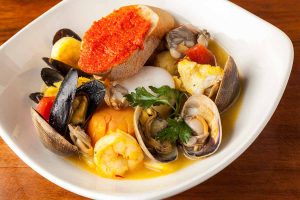 The special starts Feb. 6 when Bluewater Grill hosts “From Europe with Love” tasting for $34.95, which both French Bouillabaisse and Italian Cioppino, followed by a split of Chocolate Lava Cake or Key Lime Pie, all paired with Domain Ste. Michelle Brut or hand-selected French and Italian wines.

After Feb. 6, diners can still order the feast for $34.95, minus the champagne and wine (which can be ordered separately).

This monthly tasting event is normally held the second Tuesday of each month, but it’s been moved a week earlier so it doesn’t compete with Valentine’s Day.

Reservations are required for the Feb. 6 event. Go to bluewatergrill.com. 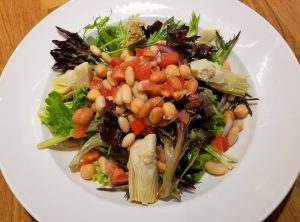 I first visited Casa Barilla in South Coast Plaza back in November, right after the Italian eatery first opened. I tried a couple of dishes, but it wasn’t until I attended a media tasting in January and met Barilla’s Executive Chef Alfonso Sanna, who has cooked professionally for more than thirty years in both Italy and the United States, that I had a better sense of what Barilla is doing.

The stylish fast-casual restaurant features an open kitchen and a variety of pasta and pizza dishes.

“This is the lifestyle we were raised on,” said Chef Alfonso. “The Italian way of eating is one of the healthiest in the world.” 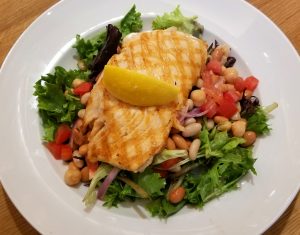 At the media tasting I was able to sample several salads, entrees, pizzas and a half dozen pasta dishes, as well as several desserts.

I quickly learned that while Barilla does pasta well, the salads are superb, and healthy. 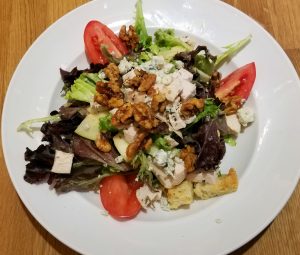 By the way, if the name sounds familiar, it’s because Barilla is an Italian family-owned food company established more than a century ago and a world leader in the market of pasta.