The Balboa Island Museum hosted a 100th birthday party last week to celebrate one of the oldest homes on Balboa Island: the home of Shirley Pepys, built in 1913.

Known for her philanthropy and festive decorations for the holidays (her home wins a Ring of Lights award every year), Pepys felt this would be the perfect opportunity, as a museum director, to bring more awareness to the museum.

The evening celebration featured a light supper at the Pepys home, her famous penguin display with light show and music, and historical photos.

Guests were invited to bring “birthday presents” of a $100 donation to the Balboa Island Museum to keep the history alive for all generations. More than $5,000 was raised for the museum.

In addition to Pepys, guests included Alan Beek, Seymour Beek, the Board of Directors of

Built in 1913, Pepys’ house was constructed with the same wide roof line that was very common in the Island’s earliest dwellings, and for the past 100 years the basic design of the house has been retained.

Initially the house was considered a “duplex” as there was a small apartment facing Topaz, between the back yard and the alley.

The land was purchased by Leonora May Collins in June 1911.  She was the sister-in-law of W.S. Collins, the initial developer of Balboa Island.

Allan and Seymour Beek, who lived next door, remember that the Suckow family lived in the home when they were little boys, and remained until after World War II.

Allan Beek recalled that “Mother always referred to the owner as Doctor Suckow.  I believe he built the house. But I don’t think the Suckows ever lived there. It was a weekend get-away, often loaned out to friends. My bedroom window opened directly on the backyard, which is where parties were often held, and I remember going to sleep to the sound of dance music or crooners coming from a radio in the yard, over the general background sound of a party.”

There was a palm tree in the southwest corner of the front yard, and another on the street side in the back yard. 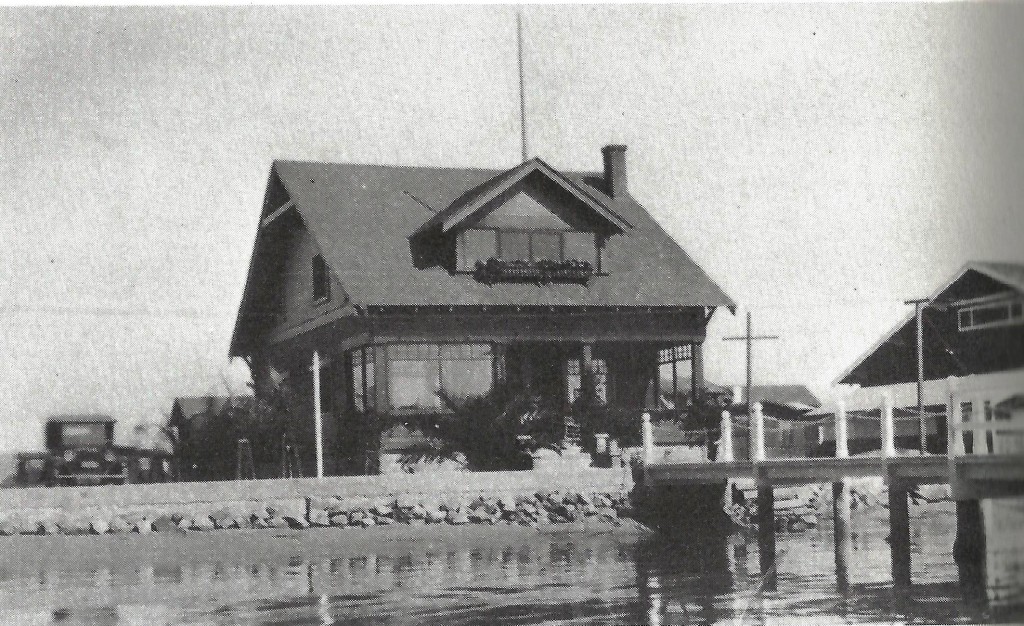 “Over the years, about a dozen baseballs or tennis balls disappeared into the upper branches of those palm trees,” Allan said. “At some time, there must have been an effort to make a garden in front, because the ground was not just Balboa Island sand. There was enough real soil in it for me to make a web of tricycle paths that I rode in and out of endlessly from 1929 to 1932.”

Originally, the pier had a float and ramp like the one at the Beek’s house, but the Suckows were not interested in boating so the float disappeared and the ramp was stored in the lot between the two houses, where it stayed for a number of years.

The Buren family rented the apartment during the late 1930s and early 1940s. Around 1945, the Baird family moved in and stayed until the late 1940s.

“The daughters were Nancy and Peggy, about my age. I remember my parents being amazed at the price the Bairds paid for the house – over $1,000 per front foot,” said Seymour Beek. “Those were the days!”

Charles and Muriel Gay were the next owners. They owned Gay’s Lion Farm, a public attraction in El Monte dedicated to the training and exhibition of African lions. At its peak, there were 200 adult lions living at the Farm. The Farm closed in 1942, when wartime rationing made it impossible to get the ton of horse meat required daily for the lions. By the time the war ended, Charles was too ill to reclaim his cats. He retired to Balboa Island, where he died in 1950.

Ownership of the home is uncertain until the mid-1970s, when Willard and Harriet Harris became the owners. They were both builders and did major remodeling, but still maintained the basic design of the original house.

After raising four children in their family home in Nellie Gail, Shirley and her husband, Eric, wanted to move back to the beach. Their real estate agent, Debbie Bibb, showed them 526 S. Bay Front.  They were also looking at a house on Lido Isle, but Shirley’s father helped them make the final decision and said that 526 S. Bay Front would allow them to live the beachfront lifestyle they desired.

“We bought the house in 1995 and two remodels were done since then, all the while maintaining the basic design. I feel so fortunate that in this last 100 years, none of the owners made a decision to tear down the house,” said Shirley Pepys.

More recently, the house has become known as the Penguin House, since playful penguins have been part of the Pepys’ holiday decorations for several years.

“Being involved with the Balboa Island Museum has given me a new perspective on the importance of preserving Balboa Island as the historical landmark of Newport Beach,” said Shirley.