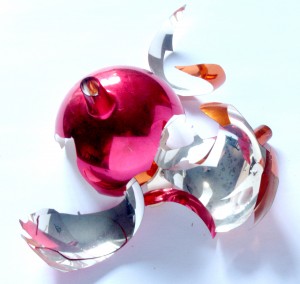 About a week ago we finally got up the muster to crawl through the rafters and pull out the Christmas decor, including the faux, two thousand-pound, 10 foot, pre-strung tree.

In theory, this lovely tree is supposed to save time and energy upon its “simple” assembly—emphasis on “in theory.”  More on that in a moment.

All went swimmingly as the neatly packed, plastic storage bins made their way down. I was pretty impressed until I began to count how many boxes there were. I didn’t remember there being this many! Now mind you, the paper machete from my youth doesn’t get put out, but I’ve kept it for posterity, and each year when it all comes down, only to go back up, I think I should take a picture and give them the heave ho. But since I’m feeling a little sentimental this year, I’ll have to address them in 2014.

With everything down, I began to open bins, and that’s when the fun started.

I realized that a good portion of the goodies inside were things I bought at the 75-percent-off sales after last year’s holidays. I uncovered a hoard of holiday party supplies sufficient to last the next three years of boat parade parties, and enough wrapping paper to swathe five thousand gifts.

Murphy’s Law states that anything that can go wrong will go wrong, especially when decorating for Christmas. Yet I always approach the season with optimism, and this year was no different.  We divide and concur, which makes things more tolerable. My hubby puts up the tree, wreaths, outdoor and boat lights, and I do the tree and the rest of the house.

As things get underway, I have learned to clear out as the tree goes up and put on some jolly Christmas music in an effort to drown out the grunts, heavy sighs and occasional four letter words that are an inevitable part of the process.

The four sections of the big tree came together nicely, but as we plugged it in, you guessed it; half of the lights were out.

“Uh oh” I thought, better bust out that cheery Burl Ives CD with “Holly, Jolly Christmas,” because I could see a storm brewing on my beloved’s brow. After about an hour of tweaking, twisting, huffing, puffing, demanding and beseeching the tree to cooperate, we finally decided to just put a few strands of the old fashioned lights to fill the void and call it a day.

As Burl belted, I began to hang some pretty red bulbs and as soon as I touched the lights, off they went. Confounded, I forgot about the glass bulb precariously perched on my palm, which of course flipped like a trapeze artist out of my hand with a crash to the floor.

“Everything OK?” called my husband with a slightly amused tone.

As I made my way down the ladder to clean up the glass before the dog licked it up, I joked that my Christmas cheer was fast becoming an oxymoron.

After an attitude adjustment and quick trip to the kitchen to start lunch, I grabbed another box of ornaments and made my way back up to the rebellious string of lights to negotiate a deal. (Naturally the non-working string had to be on the top portion of the tree.)

As I jiggled, tugged, prayed to heaven above to get them to cooperate, finally the Christmas spirit delivered and the lights popped back on.

Relieved to see all beautifully lit, I daintily hung the last bulb so as not to anger the tree light phantom again. I am happy to report I finished up without further ado.

Yet, so entirely distracted was I by the hullabaloo of lights and bulbs that I failed to remember our lunch in the oven, which had burnt to a crisp.

Oh well, I guess that’s why they call it Murphy’s Law.

Lynn Selich resides in Newport Beach.  She can be reached at [email protected].