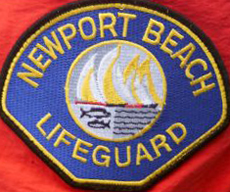 From the A Street lifeguard tower near the Balboa Pier, at about 4 p.m. Friday, lifeguard Sean Richards spotted two swimmers in distress. He successfully rescued the first swimmer, and returned to the water to assist the second.

During the second rescue effort, Richards held the swimmer with one arm while heavy surf slammed them both to the ocean floor and held them under. The two were also pushed into pier pylons by the strong waves. Richards was able to maintain his grip on the swimmer throughout the ordeal, and both made it to shore.

After the two rescues, Richards collapsed from exhaustion on the beach and was transported to Hoag Hospital. He was released from the hospital at about 10 p.m. Friday with a clean bill of health.

“I am convinced that Sean saved two lives,” said Fire Chief Jeff Boyles. “This was a heroic rescue in very dangerous ocean conditions.”

The rescues come just three days before the sixth anniversary of lifeguard Ben Carlson’s death trying to rescue a swimmer on July 6, 2014. Carlson is the only lifeguard to die in the line of duty in the history of Newport Beach,

On Friday, City lifeguards made 100 rescues and issued 2,700 preventative warnings.

“Sean’s efforts remind us how dangerous the job can be under challenging and fast-changing surf conditions,” said Chief Lifeguard Mike Halphide. “This rescue really highlights the importance of having well trained, professional and courageous lifeguards like Sean on our City team.”

Richards is part of the City’s seasonal lifeguard team. The two rescued swimmers are teenagers.

While high waves were forecast for Friday, the surf conditions became unexpectedly powerful and intense throughout the day. Friday evening, during the high tide, the swell rose and eroded a protective sand berm, causing flooding in streets and parking lots on the Balboa Peninsula.