The smallest public park in Newport Beach is barely the size of a park bench, and just about large enough for one territorial Chihuahua.

In fact, Myrtle Park is so small that the city’s four park rangers don’t even drive by, unless they happen to take a coffee break at the Galley Cafe on Harbor Island Drive (the park is that square of grass right outside the Galley’s front door that overlooks the marina and shipyard).

The next stumper: Where is the city’s largest public park?

Just about every kid who plays organized – and not-so-organized — ball knows that it’s Bonita Canyon Sports Park, although one might argue that it’s the two and a half mile-long Buck Canyon, whose lower trailhead starts at Poppy and 5th streets and snakes uphill to its terminus near San Joaquin Road and Newport Coast Road.

The Irvine Conservancy oversees the canyon, even though it resides within Newport, so the Park Patrol only sporadically checks that sliver of wild land. 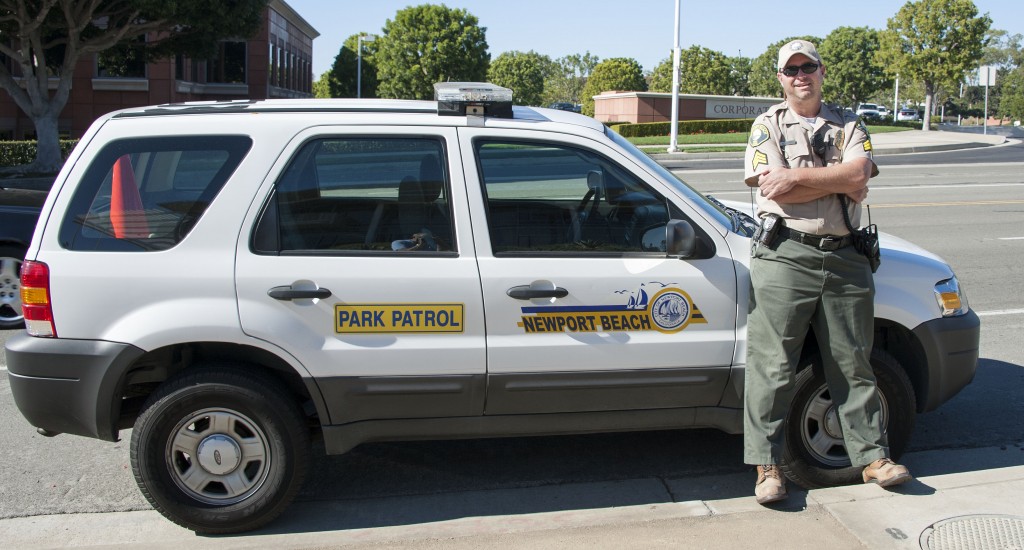 Most Newport Beach residents are unaware that our city has a Park Patrol, or that it’s comprised of one full time and three part time officers who look after 63 well-groomed parks (okay, 62 not counting Myrtle).

Operating under the city’s Recreation and Senior Services Division, the Park Patrol generally operates Monday through Friday, 11 a.m. to 9 p.m. and on weekends from 7 a.m. to 7 p.m. However, that’s only in print; all patrolmen are on call 24-7, depending on scheduled events, plus the many unforeseen happenstances in public places.

Unlike “sworn” police officers carrying side arms, the most effective weapon utilized by park patrolmen is their ability to both communicate and calmly reason with those who ignore municipal codes to the detriment of citizens and the environment.

The 15 muni codes most commonly enforced include littering, dogs, animals at large or animal nuisances, loud and unreasonable noise (including sound amplifying equipment), skateboarding and roller skating ordinances, and conduct on beaches and piers.

“Too many people allow their pets to cavort off leash, often resulting in intimidation to humans,” said Brown.

Not long ago at Big Corona Beach, school children were both shocked and excited to spot a rattlesnake comfortably coiled right below the steps to their school bus. Animal Control quickly responded to relocate the reptile, and the kids went home with stories that probably grew to anaconda dimensions.

Another handout card explains “Why no dogs in Buck Gully.” The reason: ticks, potential Lyme disease, venomous snakes, and poison oak, all of which can affect pets, as well as the dogs’ 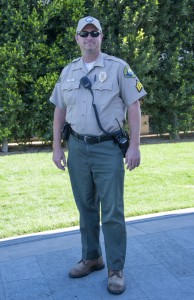 owners. Besides, dog scent and urine marking dissuade natural critters from scampering about their wild environment.

“Everyone wants a piece of our city’s resources,” said Matt Dingwall, Recreation Department Supervisor, “and everyone is figuratively (and sometimes literally) fighting for space.”

Beach fire pits and picnic tables often become the center of citizen conflict, even when a group has reserved use of either. Beachgoers, most often those from outside Newport’s borders who are unfamiliar with park and/or beach rules, believe that just because they lay out their belongings before the sun rises, that they enjoy squatters’ rights throughout the day.

Through patient and sotto voce explanation, Patrolman Brown literally breaks up citizen conflicts before the fights ignite by explaining the city’s rules and regulations. Of course, not everyone leaves happily, but they do depart with the same number of teeth with which they arrived.

Other issues pertaining to park usage include drinking, smoking and rogue field use by out-of-city teams and groups who want to play on Newport’s carefully manicured park grounds, and who conflict with scheduled practice and play.

As powerful a magnet as Newport’s legendary surf and sand are CdM’s fire rings (currently under review by both the city and the AQMD), which attract large, celebratory crowds from families to church groups.

It’s not uncommon to find that partiers have lugged giant wooden pallets down the steep access road to Big Corona, in the expectation that their campfires will rival the legendary Burning Man Festival in Nevada.

During barbeque season, patrolmen hand out waterproof informational cards explaining through words and symbols what is “punishable by up to one year in jail and up to $1,000 in fine.”

Other Park Patrol responsibilities include graffiti prevention, which is considered a problem more serious than park occupation by the homeless.

“Wherever we find graffiti, we’ll have it removed within 24-hours,” Brown reports. “This, of course, frustrates the spray painters,” who, like Newport’s four-legged denizens, are marking what they think is their territory.

“We enforce laws, but our goal is to enforce with a smile,” Brown emphasized. “We love our city, and we want everyone to enjoy our parks and beaches.”

For specific questions on everything from commercial photography and film production to parking ordinances and skateboarding to special events permits, call (949) 795-2381.

To find out about field conditions or field closures, call the popular Mudline at

To contact Richard Simon, e-mail him at [email protected]