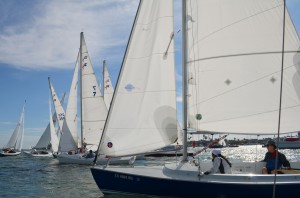 The Glass Slipper Guild and their many volunteers joined Balboa Yacht Club last weekend to raise funds for CHOC Children’s.

Racing and related festivities happened in conjunction with the Sunkist Races the weekend of November 2 and 3. Many members and racers from other clubs got together to raise over $40,000 for CHOC.

Proceeds this year will go towards CHOC’s Post Anesthesia Care Unit. With the opening of the new tower this past spring, children are able to receive a new level of care in this state-of-the-art facility.

No child is ever turned away at CHOC because they may not have insurance or the means to pay for treatment. CHOC is an exceptional place, dedicated to treating and loving the over 210,000 children who come to them every year.

From the incredibly dedicated doctors and nurses to the tireless research which takes place in order to save the children who come to them, you can feel the love and commitment that takes place every day.

On Sunday, when the larger boats raced, the winner of the CHOC Cup for the largest amount donated to the Regatta was once again BYC member Jim Devling, owner of Campaign II. His compassion and unwavering efforts to raise funds for this important cause are truly inspiring.  Campaign II also came in first in the PHRF E Division.

Other winners included It’s OK  in Division A, Alan Andrews, also BYC on Doubletime in Division B, in Division C Brian Dougherty of LIYC on Legacy, and in Division D, Anthony Delfino of NHYC.

On Saturday, in the inside classes, the largest group was the Harbor 20 B class with eighteen skippers. Bob Larzelere of BYC won in the Thistle class; Ed Kimball, ABYC in Harbor 20 A, Steve Kent, BYC in Harbor 20 B, while in Harbor 20 C, Ted Reed of WORSA was first. BYC member Katie McDowell was first in Lasers, while in Lido A, Walter Johnson, BYC, won.

In Lido B, the Mueller family of BYC was victorious. Jeff Lenhart of Mission Bay Yacht Club came in first in Sabot A. The Sabot class with twelve boats was the second largest.

The CHOC regatta is an annual event with the next one scheduled for November 1 and 2, 2014.  Additional information, complete results and photos are available at balboayachtclub.com.