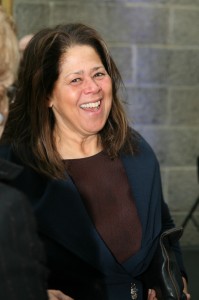 Widely credited with creating a new form of theater in which she combines dramatic performance with social commentary, actress and playwright Anna Deavere Smith uses her unique, one-woman shows to tackle the issues that face America today.

Drawing almost exclusively on her own interviews with everyday folks from across the country, Smith uses Walt Whitman’s idea of “absorbing America” to craft presentations that touch on our nation’s diversity, character, and sense of community.

This month, she brings her engrossing brand of story telling to Newport, as she becomes the latest presenter in the NBPL’s Witte Lecture Series.

Keeping in line with their mission to offer compelling voices that embrace a global perspective, the Witte Lectures will host Smith, as she slips in and out of character to tell a story that recreates a diverse set of emotions and points of view on the controversial issues Americans face today.

As an actress, playwright, author, and university professor, Smith uses her observance of her fellow Americans to inform her craft. Though her acting career has seen many roles, from television, to Shakespearian Theater, she is perhaps best known for her own “documentary style” one-woman shows.

The two most prominent of these were “Fires in the Mirror,” which centered on the Crown Heights Riots, and “Twilight:  Los Angeles, 1992,” about the riots in Los Angeles after the Rodney King verdict.

Both plays were written exclusively with the material garnered in interviews with those who were there for the events. Smith transformed herself into multiple characters, without the use of props or make-up, and used the verbatim transcripts of her interviews to tell a gripping story.

These masterworks earned her the Drama Desk Award for Outstanding One-Person Show two years in a row.

The New York Times has said of Smith that she is “the ultimate impressionist: she does people’s souls.”

Smith herself describes her work more plainly by saying, “I don’t wear shoes (while performing) just in case I feel like I have to cuddle up and get into the feet of somebody, walk in somebody else’s shoes.”

By all accounts, that is exactly what she does, and with such expertise that she invites her audiences to take the walk with her.

Smith’s work has been considered so groundbreaking that she has been awarded both a MacArthur Fellowship and a Fletcher Foundation Fellowship for her contribution to civil rights issues.

In addition to being nominated for numerous other awards, including Tony Awards and a Pulitzer Prize, she has also been awarded with the prestigious Dorothy and Lillian Gish Prize and the National Humanities Medal for 2012, from President Barack Obama.

On Friday, April 25, and Saturday, April 26, Smith will grace us with her unparalleled skill, as she presents “Snapshots:  Portraits of a World in Transition.”

Friday night’s appearance will begin at 6:30 p.m., and will include a wine reception with music, followed by the lecture, Q&A, and a dessert reception with book signing. The cost to attend is $50 per person.

Saturday’s event will commence at 2 p.m., with the lecture and Q&A, and will include a dessert reception and book signing as well. Tickets are $35 each.

There is a $5 discount on tickets to either event for NBPL Foundation members.

This rare opportunity to hear commentary on our current state of affairs, presented in such an engaging way from a master storyteller such as Smith, is certainly one that is not to be missed.

For more information on NBPL Foundation events, or to purchase tickets, please visit nbplfoundation.org, or call (949) 548-2411.

Edie Crabtree is an avid reader and the mother of three active boys.  She can be reached at [email protected], or on the Facebook page, Under Cover Book Corner.