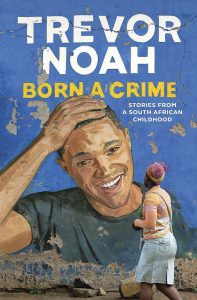 It is hard to believe that we have collectively turned the page on another chapter—one more volume of life now closed and tucked away into a grand library, to be looked back upon only occasionally as we move forward in pursuit of what is yet to come.

The first of January is widely accepted as a fresh start. Everything we have struggled with, rejoiced over, and failed at over the course of the last twelve months is now in the past, and the new year brings with it a renewed opportunity to reach our potential, in countless ways both large and small.

Reading is an invaluable tool in the journey towards our best selves. There is always more to be discovered, and the same books are available to all of us, regardless of economic status, education level, gender, race, or religion.

It is with this thought, that I present the Under Cover Book Club selection for January: “Born a Crime: Stories from a South African Childhood,” by Trevor Noah.

Best known as the current host of Comedy Central’s “The Daily Show,” Noah has penned the book as a telling of what it was like growing up in apartheid-era South Africa as a child of mixed race.

Under apartheid, it was illegal for people of “European” descent to have relations with those of “Native” descent. Doing so was punishable by up to five years in prison, and the children born of such a union were often taken away and sent to orphanages populated with “colored” children.

In a country where there were sharp racial and tribal separations, this was the term used to refer to people who could be classified as neither “black” or “white.”

Being part white made you not black, and being part black made you not white, and therefore you were left to live in a sort of “colored” limbo, not quite fitting in anywhere.

This was the case for Noah, who, by his very existence, was also evidence of a crime. Thus, he spent much of his early life being hidden away, never able to run freely outside with his black cousins, for fear of being taken.

As if racial hardships weren’t enough to overcome, Noah also grew up in near total poverty. His extended family – grandmother, great-grandmother, aunt, uncle, cousins, mother, and himself – at one time all shared two rooms, one to sleep in, and one to cook and sit in, while sharing a communal outhouse with the neighborhood.

Add in an abusive step-father, and it is miraculous that Noah survived his life at all, much less became the successful individual he is.

One thing is sure, Noah was saved by two things: His mother, and his ability to be a chameleon. Like his multi-lingual mother, Noah speaks six languages, and found this skill to be a powerful tool. People are more comfortable with those who are like them, and being able to sound like the different groups he associated with helped him in gaining their acceptance.

Noah’s mother was unconventional for the time, refusing to let social mores determine what she and her son should strive towards. Deeply religious, she often ruled with an iron fist, but was also relentless in her pursuit of the best education for Noah, both academically, and morally.

In an interview with NPR, Noah said of his mother, “I thought that I was the hero of my story, [but] in writing it I came to realize over time that my mom was the hero…I was lucky enough to be in the shadow of a giant.”

While Noah owes much to his mother, he is still a hero in his own right. And, in sharing his story, he inspires us all to become our own heroes as well.

His ability to rise above all the landmines life threw his way will make whatever it is we need to tackle in the coming year seem like a piece of cake.

And, we all know that cake is best enjoyed with a good book.