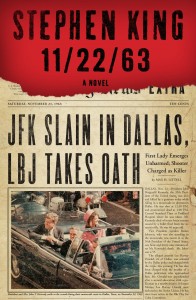 What if Lee Harvey Oswald never became a household name? What if the Zapruder film was just a scratchy family filmstrip? What if the grassy knoll remained nothing more than a lovely patch of green?

While these things are seemingly impossible to remove from the collective American consciousness, the possibility of making them insignificant is what Stephen King raises in his novel “11/22/63.”

Many books have been written over the last 50 years that question how many shooters were there on that fateful day in Dallas. Some have offered motives for the assassination, and even pondered whether Lyndon Johnson himself was in on the plot. There have been countless documentaries made furthering any number of conspiracy theories, some plausible, and some far from it.

Through it all, and despite learning of several of Kennedy’s less than charming habits, Americans have remained enchanted by “Camelot,” and our own almost-royal family. Many have wondered how allowing JFK to finish out his service as president of the United States would have altered our nation’s path to the present.

King took that thought, and expanded on it — enough to fill the 880 pages that make up this, his recent tale.

In “11/22/63,” we meet Jake Epping, an English teacher from Maine. Jake discovers that in the storeroom of the diner, owned by his buddy, Al, there lies a portal that can transport someone back in time to 1958. At the other end of this portal lies a different world — a Norman Rockwell America, full of big cars, small towns, and two young men whose stories are destined to become forever entwined:  John Fitzgerald Kennedy, and Lee Harvey Oswald.

Jake, tasked with the duty of finding a way to prevent Oswald from pulling the trigger, makes the trip back to the past. Before getting to work in Texas, however, he tries to stop a family tragedy from befalling one of his adult students, only to discover that preventing something bad from happening in the past does not necessarily ensure that the future will unfold in the way you had hoped.

Jake learns, in fact, that the past is “obdurate” and resists change. As we all learned from watching “Back to the Future,” one little change to history can create a butterfly effect with disastrous results in the future.

Nevertheless, Jake makes his way to Texas, intent on stopping one of the greatest American tragedies. He settles in the small town of Jodie, and begins his new life as George Amberson, a young teacher on a path to seek out the loner Lee Harvey Oswald, and alter his course before he becomes a figure in a history book.

Along the way, he finds his soul mate in librarian, Sadie Dunhill, causing him to question whether he should fulfill his mission and return to the present, or settle down in small-town America with his true love, letting the chips fall where they may.

While I can’t reveal how the story unfolds, and whether, in fact, Kennedy is spared the magic bullet, the premise is an interesting one. If things had gone differently 50 years ago, where would our country be today? If Kennedy had completed his term, would he have served another? Who would have succeeded him? How would the face of civil rights, and the space race, and nuclear weapons development have changed with someone else at the helm?

These are questions that sadly, we will never have an answer to. Those possibilities came to a tragic, screeching halt on November 22, 1963 with a well-aimed assassin’s bullet. No one who was alive at the time will ever forget where they were when JFK was shot, but thanks to this novel, we can all imagine a world in which John-John grew up with a daddy, and one less three-named shooter made it into the annals of history.