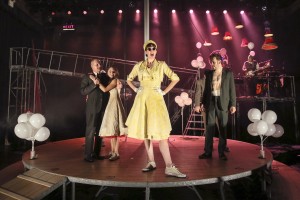 When it comes to smashingly effective stagecraft there’s this thing our British Cousins do very well indeed.

Call it the art of the ensemble, the troupe. Anyone lucky enough to have seen the entire Royal Shakespeare Company gloriously inhabit every last nuance of Dickens’ “Nicholas Nickleby” 35 years ago, knows exactly what I mean. Watching that production was eight and a half hours of rapt rapture.

It was all about the cooperative, collective storytelling.

Onstage, we Yanks just don’t seem to achieve that as well.

Maybe it’s because the Brits never abandoned their ancient traditions of minstrelry. (They still broadcast radio 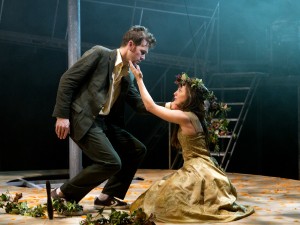 plays and they still produce Christmas pantomimes.) Or, as pragmatic as money, that island nation supports two national rep theaters in contrast to our none. It takes time and commitment to nurture this kind of art.

In any case, for those of us who delight in this particular brand of playmaking, the presence of “Tristan and Yseult” at SCR — conceived and performed by Kneehigh, a Cornish troupe that has worked together since 1980 and has been gathering impressive international traction in recent years — is cause for celebration, indeed. 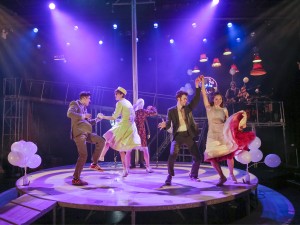 These breathtakingly inventive artists, are, with the insouciance of the Harlem Globetrotters, daffy yet disciplined; serious, silly, and sensual. Think Ethel Barrymore meets Gracie Allen; Anthony Hopkins with a dash of Jacques Tati.

The 12th century legend that inspires it is, of course, the myth you never knew you already knew; the Mother of all love triangles: A victorious King sends his beloved nephew to bring the sister of his defeated enemy as a spoil of war, and to be his bride. In so doing, the nephew (Tristan) and the girl (Yseult) fall crazy-mad in love. Complications result, the big ones: loyalty, lust, betrayal, death.

The story influenced Shakespeare’s Romeo and Juliet, inspired Wagner’s “Tristan Und Isolde” and provided the entire plot for Lerner and Loewe’s “Camelot” (as in Arthur/Guenevere/Lancelot).

It’s a story dripping with adolescent angst, of both the head and the heart. Magnificently theatrical, it’s a perfect match, in this production, of substance and style. 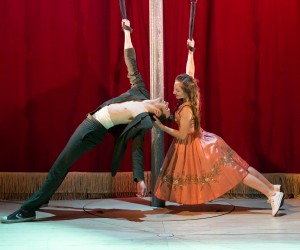 that plays salsa, Irish folk, rock and roll and Richard Wagner with equal aplomb. No technique is taboo as long as it’s in aid of exploring and forwarding the mood, the theme, the story. (At one point we are even asked to inflate and release balloons to help add festivity to a wedding.)

The young lovers are literally hoisted into the air by an aerialist’s rig — but don’t expect Cirque de Soleil. Kneehigh seems never out to bedazzle us gratuitously. It’s interested in dramatizing: “Look—these kids are so in love they’re literally levitating! “

The effect for an audience is liberating and joyous. The theatricality achieves brilliance not in spite of its simplicity but because of it. It’s serious play, with an equal emphasis on both words.

For some of us, seeing an ensemble like this at SCR inspires a melancholy nostalgia for days gone by at this very institution. SCR was founded by an ensemble of theatre artists not so different in spirit from Kneehigh, and though 50 years of evolution has naturally dimmed their influence, wouldn’t it be nice if that old spirit, in whatever form, could be rekindled?

Meanwhile, kudos and gratitude to SCR for bringing this spectacular piece of theatre art to our doorsteps; for reminding of us the wonders that can only happen when stories are told inside a theatre.