Weddings were the theme of the night when we attended two different events last week: the musical “I Do, I Do!” at The Laguna Playhouse, and an outdoor screening of “The Wedding Singer” at Segerstrom Center.

I’ve been married twice, Catherine has yet to take that matrimonial walk down the aisle, yet we both enjoyed the observations on love, relationships and marriage that each event offered.

Written by Tom Jones and Harvey Schmidt (the creators of the longest running musical in history, “The Fantasticks”), “I Do! I Do!” is a two-character musical that spans 50 years in the lives of Agnes and Michael Snow and their sometimes rocky marriage. 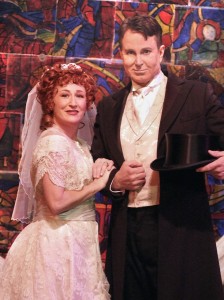 The original Broadway production opened in December 1966 and starred Robert Preston and Mary Martin. For the Laguna Playhouse revival, Davis Gaines (“Phantom of the Opera”) co-stars with Vikki Lewis, who also has some impressive Broadway credits.

We attended the opening night gala for “I Do! I Do!” last weekend, and were very pleased with what we saw, especially after having had dinner with Gaines and learning how challenging this deceptively simple show was to put on stage.

“Davis and Vicki had amazing chemistry,” stated Catherine after the show. “I was completely pulled into the story and progression of their relationship, from young love to becoming parents to the empty nest syndrome they experienced towards the end of the play. I highly recommend this show to everyone from young adults on up because anyone can relate to the show as well as learn from it.”

“I agree–I learned that I don’t want to get married again,” I laughed. “But yes, the themes are very relatable, and Davis and Vikki were perfect together. They were a joy to watch on stage. Their efforts made the nearly 50-year-old play relevant and fun. Some of the dialogue is a bit dated and the songs are not instantly hummable, but they help to illuminate the character’s thoughts and motivations, and serve the play well. I’d also recommend this show to anyone who wants to see a pair of top-notch musical theatre stars at the top of their game in an intimate 400-seat theater.” 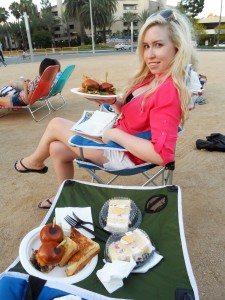 Each movie is projected against the wall of Segerstrom Hall, and attendees are invited to bring beach chairs, blankets, and food.

Patina Catering is also offering specially-themed menus for each movie, so we decided to try the “Wedding Singer” menu to accompany the movie, which stars Adam Sandler as a left-at-the-altar wedding singer.

“This grilled cheese sandwich is excellent,” I enthused after a few bites. “So is the wedding cake.”

“I love the themed menu,” agreed Catherine. “The food options are done at what I’d call a gourmet level, but I also like the fact that they have regular movie snacks like popcorn and sodas.”

We settled back in our folding camping chairs and enjoyed the trivia contest held prior to the screening, followed by two award-winning shorts courtesy of the Newport Beach Film Festival, and then the main feature, which we’ve seen before yet liked all over again.

All told, a very fun and unique night at the movies.

Movie Mondays run through August 5. Upcoming screenings include “Mulan” (July 22), “The Phantom of The Opera,” (July 29) and “Evita” (August 5). Movies begin at dusk, but we suggest arriving at least an hour early to snag a good spot and to enjoy dinner.