I’m a dreamer – literally and figuratively.

Figuratively, I typically see the opportunities, and dream of the potential in life. I feel that to dream of the possibilities is an important part of our psyche. For me, it goes right along with the glass-half-full theory. 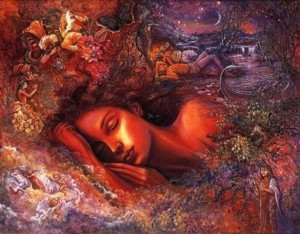 And literally, each and every night as I lay my head down to sleep, a Technicolor explosion of my imagination takes over and entertains me as if I’ve just switched on my own personal HBO series. The problem is that my series has a jumble of writers that change the story line, actors and plot each night so I never know what is going to unfold. I wake up thinking “where did that come from?”

Perhaps I have deep-rooted ambitions, ideas, fears, joy, anger and adoration trying to make their way to the surface? Conceivably, my dreams may simply manifest from an over-active mind that never seems to shift to low gear even when I am perfectly relaxed.

Whatever it is, I am always amazed to find friends and relatives who say they never dream. How can that be, when Panavision takes over my brain each time I close my eyes? I realize we are all different, and perhaps my sleep is not deep enough. Someone suggested that my intense dreams are a result of not reaching that place of never-never-land where you simply don’t remember dreaming. I have always gotten plenty of rest, so don’t feel like my dreams interfere with my sleep per se, they are just a ubiquitous part of who I am.

The good news is that the great majority of my dreams are inventive and funny, or just entertainingly bizarre in a Tim Burton-esque, “Edward Scissorhands” kind of way.

Some of the standouts over the years include a dream in which Michael Jackson (pre-cosmetic surgery – think “Thriller” album cover) and I are eating lunch in the cafeteria of the grammar school I attended. Suddenly, Michael initiates a food fight and the whole place erupts like the scene from “Animal House.”

I could vividly see the faces of kids I went to school with even though I hadn’t seen them in 30 years. I was laughing so hard while throwing chunks of white-frosted cake at our dearly departed Mr. Jackson, that I woke myself up giggling.

or years I would have a reoccurring dream about watching a plane crash. I am never on the plane that is crashing, just watching from a distance. I chalk it up to my irrational fear of flying, but when I looked it up in “The Dreamers Dictionary,” the authors suggest that the crash “heralds an important achievement, and the louder and bigger the crash, the more noteworthy will be the accomplishment.”

When I looked the same dream up on thecuriousdreamer.com, they explain that I have “a fear or feeling of something catastrophic happening.” This seems significantly more logical in my book. But then, most of my dreams are not very logical, so who knows?

I’ve had quite a few dreams where I am inventing the next big thing that will transform some aspect of everyday life. I really need to make the effort to write these dreams down when I wake up. We all might actually have some great invention locked away in our subconscious just dying to be revealed when we least expect it.

For example, did you know that the tune for “Yesterday” came to Paul McCartney in a dream? Or that golfer Jack Nicklaus found a new way to hold his golf club in a dream? The great inventor Elias Howe dreamt that he was taken prisoner by a group of natives and as they danced around him, he noticed their spears all had holes near the tips. When he awoke, he realized he had the solution to making his new-fangled machine work like magic.

Since science has yet to unravel the mysteries of the brain, including the true meaning and wisdom behind dreams, I say dream on!

And be sure to keep a pad of paper on the nightstand.

Columnist and dreamer Lynn Selich, resides in Newport Beach during waking hours. When she is asleep however, it’s anyone’s guess She can be reached at [email protected]