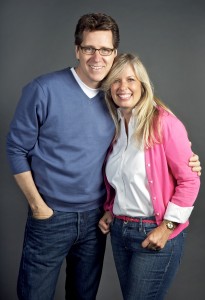 “No matter how loving you are, you will have conflict. It’s inevitable,” Dr. Les Parrott said to over 1200 people recently at Mariners Church. “Conflict is the price we pay for a deeper level of intimacy. The goal is not to eliminate conflict, but to use it to your advantage.”

Drs. Les and Leslie Parrott addressed the topic “Fight Night: How to Fight Fair.” During the two and a half hour workshop, couples laughed while learning what to do so that conflict can actually bring them closer. Attendees ranged from newly engaged to those married over 50 years.

The Parrotts are psychologists, speakers and New York Times bestselling authors of more than a dozen books on relationships, including “The Good Fight: How Conflict Can Bring You Closer.” They are co-directors of the Center for Relationship Development at Seattle Pacific University. They are both named Leslie; he goes by Les, and she is Leslie.

“The event came about because our church recognizes that relationships can be both beautiful and damaging,” said Eric Heard, Men’s and Marriage Ministry Pastor at Mariners. “Marriages have a horrible divorce rate, especially in our county. Nobody gets married thinking they’ll get a divorce, but they see so many marriages fail and wonder if they’re going to last.”

“We found a couple both nationally and internationally known, who address things in marriage that really matter,” he continued. “It’s a great title, because if you can get the men to come, the women will follow, and men like a good fight. The reality is that every marriage has fights. What defines a marriage is how you manage and resolve the fights.”

“Perception is so powerful in marriage,” Leslie Parrott explained. “We often think we’re seeing both sides of a situation, but we aren’t. What we see and feel depends a lot on where we’ve been. We all have our own perception of reality, our own context.”

“Ninety percent of the issues we struggle with would dissipate if we could accurately look at it from their perspective,” Les Parrott said.

The Parrotts had people laughing throughout the presentation, and invited audience participation.

“You can have a dumb fight about anything,” Les Parrott said. “We once counseled a couple who fought over whether or not their cat was fat. What are some of the dumb fights you have had?”

Leslie Parrott said that besides the obvious physical differences, men’s and women’s brains differ as well.

“God designed men’s and women’s brains so differently,” she said. “Nothing reveals the differences more than our approach to conversation. Men use report-talk: they want to be in the know, to get the information, to get to the bottom line. Women use rapport-talk: our goal is to bond, to make a connection, to build a relationship.”

“One way to do this, is to know what the C.O.R.E. of a good fight is, and to add from each of the following areas: C –Cooperation. Try to fight for a win-win solution. You aren’t trying to beat each other, but to win over the problem together. O – Ownership. Own your share of the problem. R – Respect each other and steer clear of belittling one another. E – Empathy. Step into each other’s shoes.”

“Try to choose to do one of those to start with, and most likely your partner will match it,” he said. “Be sure to avoid criticism, defensiveness, contempt and stonewalling.”

Cindy can be reached at [email protected].