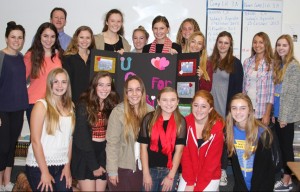 “I’m hoping to be able to give back some of what God has given to me and maybe bring change to someone’s life,” said Andie Wright, a 16-year-old student at Corona del Mar High School. “I realize how much I’ve been given and am so grateful, and I want to use it to help others. My connection with Impact Ministries Uganda has touched me and made me want to help and serve others. When we video-chatted with the teens in Uganda, I really connected with them. They were so happy. I’m hoping to raise $5,000 this year for them.”

Wright is president of “Hearts for Uganda,” a new club at Corona del Mar High School.  The club completed all the paperwork over the summer, had a booth at club rush week, and has met twice so far. They meet Wednesday during morning break, and their goal is to raise awareness and funds for the Ugandan teens to go to high school.

“Our church is involved with a group called Impact Ministries Uganda, which was started by Pastor Patrick and Christine Okabe in Uganda,” Kipp said. “Our church is sponsoring their son Daniel, and helping him go to school at Vanguard where he’s getting his degree in broadcast journalism. He hopes to help with his father’s radio station. His father has a huge heart for kids on the street, and what began with him inviting kids to his house to hear the Bible led to him starting an orphanage. There are now 300 children in the orphanage and another 400 come every day for food and education, some having walked eight miles; it’s pretty amazing.”

“The children in Uganda live by faith and hope for basic necessities like an education,” Daniel Okabe said.

“Daniel arranged for the groups to worship by Skype one Sunday, and our kids fell in love with them,” Kipp continued. “Our teens asked kids in Uganda what their biggest challenge was, and they answered that it’s getting food. They asked our kids, and ours said the biggest challenge was the social part of life, kids being mean to each other. The Uganda teens said they wouldn’t think of acting nasty, or of not greeting everybody nicely; it’s a tribal community and they really need each other.”

Kipp said the median age of people in Uganda is 15, because so many have died from AIDS, leaving most kids with no family to help them. The teens age out of the orphanage at 13, and education is so expensive in Uganda that few can continue after that.

“The average person in Uganda lives off 50 cents to $1.00 a day, so going to school is really out of the realm of possibility,” Kipp said. “Even public school costs too much.  Once they’re out of school, their options aren’t good, and include things like sex trafficking and the drug trade.”

Plans are in the works for a fundraiser for “Hearts for Uganda” around Valentine’s Day.

“People hear about the club and the goal, and want to do something,” Kipp added. “It’s really coming together. It exciting.”

“I believe we can do great things with this club,” said club member Madeline Van Otten, 15. “I’m involved because I believe it’s very important for people to get an education. Some people can’t. If we have money to give, we should help them anyway that we can.”