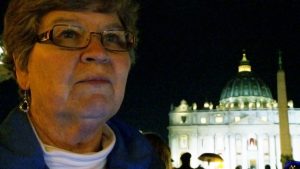 In 2012 the Vatican issued an official censure of American nuns saying that feminism is incompatible with Catholicism and the nuns needed to abandon their view to remain part of the church.

Three nuns took a stance, and took to the road, to challenge the patriarchal system and teaching on women concerning female ordination and other issues.

“Radical Grace” is a documentary about those three feminist nuns willing to risk their role in the Catholic Church to follow their deeper commitment and call to social justice.

The film gives the audience a chance to see some of the unique challenges and changes-in-the-making in the Catholic Church as the nuns chose to live out their vows of obedience to God in ways that were counter to the hierarchy of the Catholic Church.  Viewers also get to ride along on the “Nuns on the Bus” tour and watch a determined group of women rebel against the Vatican’s censure.

In a Director’s Statement, Rebecca Parrish said she didn’t set out to make a film about religion, but to document unique acts of social justice. That changed, however, when she met Sister Jean Hughes who worked with formerly incarcerated felons on the West Side of Chicago.

“Sister Jean exploded my stereotypes,” Parrish said. “Her passion for justice, and deep, irreverent spirituality had me hooked. I realized that the story of women like her, injecting their spirituality into their work for social change, was something I wanted to share with the world.”

Parrish interviewed hundreds of nuns across the county and created the documentary around the stories of Sister Hughes as well as Sister Simone Campbell and Sister Chris Schenk.

“My goal is to try to love people as unconditionally as I can so that they have that experience at least once in their life,” Sister Jean said in the film. “I think that’s a sacred duty and that’s what I expect of the church.”

Sister Simone Campbell, Catholic nun, lawyer, author and lobbyist, launched the “Nuns on the Bus” tour, which covered thousands of miles across the United States to promote social and economic justice and to ensure that President Obama’s Affordable Care Act would be upheld.

“I think the Holy Spirit makes mischief in surprising ways,” Sister Simone said in the film. “We’ve just used this attention on us to be a reflector onto what we care about.”

The film also highlights Sister Chris Schenk, an activist for women’s full equality in the Catholic Church and columnist for the National Catholic Reporter.

“What do they mean by feminist – the radical notion that women are equal, that women are people like other people?” Sister Chris said in response to the Vatican’s claim that the nuns were promoting radical feminist themes. “If that’s a sin, then I’m guilty as charged.”

“Radical Grace” will be shown at Edwards Newport on April 28 at 3 p.m. Visit NewportBeachFilmFest.com for tickets.