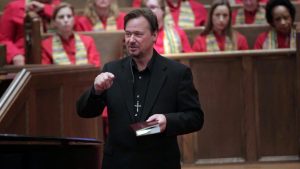 Say what you will of the glories of cinematography or witty dialogue (think the old Spencer Tracy-Katherine Hepburn movies), a compelling movie involves people and their stories.

Such a movie is writer/director Scott Shepard’s “An Act of Love,” which screens at the Newport Beach Film Festival April 27 and 28. It’s filled with both people and a timely story line: the refusal of some Christian denominations – in this case the United Methodist Church (UMC) – to neither fully embrace the LGBTs among their congregations nor perform same-sex marriages.

Told primarily through the reminiscences of UMC minister Frank Schaefer, who was serving at the time the trouble started in Chester County, Pennsylvania, and his family, the film shows their spiritual odyssey as they come to terms first with their son’s homosexuality and later with Schaefer’s principled decision to perform a same-sex marriage ceremony.

That action thrust the church into the national news and led to Schaefer’s disciplinary hearing within the church. He 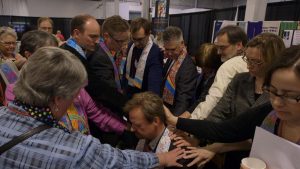 was defrocked in 2013; there followed a drawn-out process of appeals.

Interspersed with the Schaefers’ story are those of several other UMC pastors, church officials and members on both sides of the issue, and LGBT activists. The pain of the battle is apparent in many of the faces on camera.

Schaefer was eventually reinstated as a minister in the UMC, though one sees the toll the process took on him and his family Along the way, we see “Stop the Trials” signs, civil disobedience, legal wrangling, lobbying, and, of course, prayer.            “

Can’t we find some way not to have to do this to each other?” cries one man during the debate.

When it comes to same-sex marriage and LGBTs’ desire to serve fully in the UMC, this film argues that love trumps black and white rules.

For the conflict between church law that inflicts pain upon believers versus their attempts to live godly, authentic lives becomes problematic given what Jesus Christ commanded of those who would follow him. It can be found in Mark 12:30-31: “Love the Lord your God with all your heart and with all your soul and with all your mind and with all our strength…. Love your neighbor as yourself. There is no commandment greater than these.”

Letter to the Editor: The City’s Public Portal Contains Myriad Letters Against Electing Our Mayor

Letter to the Editor: Trust Voters on Elect Our Mayor Initiative