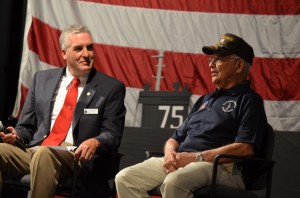 Patriotism pulsed through the walls of Mariners Christian School on Monday as over 250 Veterans and guests joined students, faculty and volunteers to celebrate Veteran’s Day.

“Veteran’s Day at Mariners Christian School is the most special day,” said Bob Sladek, head of school, as he welcomed the audience. “We live in a world that is moving far too quickly. Remembering the service, the sacrifice, the honor, and the courage expressed throughout our country’s history by Veterans is worth pausing to remember.”

“We live in a time when patriotism is waning, when it should be on the rise,” he continued. “Patriotism matters to us here. Being proud to be believers in Jesus Christ and proud to be Americans still has great value. Freedom is such an important concept. There are very few truly free nations in this world. Freedom always comes with a price and great sacrifice. Today is about giving honor to whom honor is due, and we honor Veterans today.”

Sladek thanked the Rancho Mission Viejo Company, Tony Moiso and the Lamkin family for hosting the breakfast prior to the larger program. During the breakfast, Veterans and active duty military briefly shared their experiences. Guests then moved to the auditorium for the larger event.

“With this program we not only seek to honor our Veterans, and to hear first-hand about service to our county,” said Sue Celek, family and student care director. “We also desire to teach and train our students about our national symbols, historic events and respectful ceremonial behavior.”

The program included Posting the Colors, the Pledge of Allegiance, patriotic songs, prayer, student performances, a video of the 8th graders’ trip to Washington DC, and recognition of Veterans.

Then Todd Perkins, MCS Chief Executive Officer, interviewed Eddie Felix. Felix served as Water Tender 3rd Class, aboard the USS Cowpens, the first American carrier to enter Tokyo Bay. When the Japanese surrendered on the deck of the USS Missouri, the USS Cowpens was anchored nearby. Felix is one of the few remaining veterans from WWII.

“Students, this is the third time I’ve visited here,” Mr. Felix said. “This is one of the most impressive schools I’ve ever seen. Take advantage of the opportunity you have here. One day you’ll be on your own, and you’ll have to persevere as best you can.  I’m proud to be here and hope you’ll do the same in the future.”

Near the end of the morning, Perkins awarded Beate Wilder-Smith the second annual Dr. Ben Friedman Leadership award, named after long-time supporter of the school.

“This year we’re honoring a long term MCS friend,” he said. “Two years ago, we heard her story about her upbringing and survival under the Nazi regime in Germany, and the steps her family took to maintain their faith, to support one another and to survive the war. Part of leadership is not only physical courage in surviving terrible hardships, but also having the courage of one’s convictions.”

The school has adopted the USS Harry S. Truman, which is currently on a nine-month deployment. MCS Alumni Lt. JG Jon Weissberg, a graduate of the United States Naval Academy, is an officer on board the carrier. Students pray for crew members regularly, and recently held a pancake breakfast to raise funds for them.

Perkins explained that as part of the Leadership Award, the crew will also be receiving 10,000 air minutes in the form of phone cards that they can use to call home during the holidays.

It was only fitting to finish the program by singing “God Bless America.”