Funerol is an apt name for the indie punk band that explores the precarious line of when good times turn bad. The group conjures images of Modelo and leather jackets with their catchy melodies, growling vocals that are just lo-fi enough, and eerily poetic lyrics.

Front man Evan Escoboza, who lives in Costa Mesa, met drummer Adam Avalos and bassist Coda Hampton while playing hockey. Lead guitarist Graham Gould met Adam while in Colorado. Rhythm guitarist Jimmy Baeskens was working on the docks when he was introduced to Evan backstage at a show.

“I grew up listening to a lot of California punk, like Social Distortion and Agent Orange, so the influence is definitely there,” Jimmy says, although it was Johnny Cash that inspired him to pick up the guitar.

When writing songs, Jimmy’s lyrics are metaphoric and intricate, differentiating Funerol from other punk bands.

“I watched ‘Walk the Line’ and it kind of inspired me to get a guitar, along with Dee Dee Ramone,” he laughs, “I thought it seemed so unattainable, but my aunt got me a guitar for Christmas in the fifth grade and it just went from there.”

The band is inspired by a refreshing cast of artists such as Rikk Agnew, The Replacements, The Walkmen, The Stills, The Byrds, and even the Carter Family. While Funerol has all the rough and tumble of a good punk band, their deeper introspection and musical variety makes them great artists. 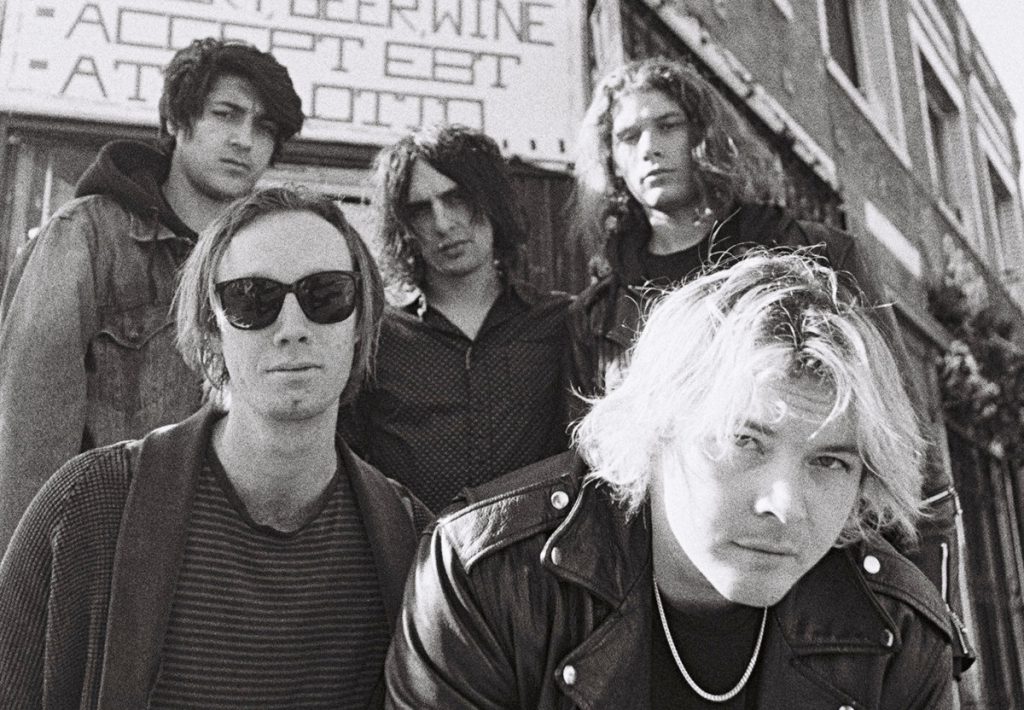 “Middle Seat” is a catchy number with growling vocals and a brighter, more poppy melody about watching a friend self-destruct. The razor thin line between good times and bad times is a theme the band explores, and the lyrics are wonderfully relatable: “I can’t control your anger, but I can be here for now.”

“Honor Amongst Thieves” features vocals reminiscent of the Strokes’ “Heart in a Cage” or “Juicebox.”

“Till it Starts to Rot” opens with punk guitar power chords that falls into punchy drums complimenting the pent-up energy and aggression of the refrain: “We never had it made, still trying.”

If these songs are just a taste of what’s to come on “Afraid of the Weekend,” then Funerol will have themselves a debut album that’ll be hard to top. The nine-track record is tentatively planned for a December release. The themes of the album include relationships, self-reflective longing, regret, doubt, but also having a good time.

Making good and bad decisions and seeing where those choices led you in hindsight, while still enjoying where you are now, is wonderfully self-aware. There’s an understandable progression to the record, starting with more aggressive songs and ending with a ballad called “Stop Trying” about how one’s own perspective isn’t always accurate.

“That song is kind of a message to ourselves to stop trying to be smarter, or tougher, because everyone is going through something,” Jimmy explains.

The music video for the album’s titular single “Afraid of the Weekend” recently dropped. Shot over the course of two nights, the Libertines inspired montage encapsulates a typical weekend for the band. Funerol wants you to know that they’re good friends and actually hang out, unlike some other bands who just get together to make music. The group is filmed engaging in typical delinquent antics like lighting fireworks on freeways and gazing at the nocturnal Los Angeles skyline.

Spurred by the likes of David Berman and Tex and the Horseheads, the band is full of depth, catchy melodies, driving rhythms, observant, introspective lyrics, and punk ingenuity.