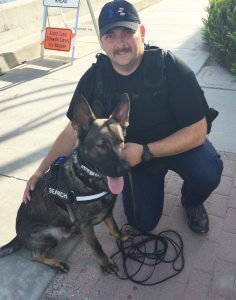 You’ll find no definition of “prodigy” in any veterinary medical journal, yet there can be no other description for one-year-old Ekko, a German Shepherd being groomed for the sensate world of trailing lost persons.

Sandu’s dedication coupled with Ekko’s daily training regimen may provide the difference between life and death for lost persons throughout Orange County.

Although Sandu is a member of the Newport Beach Police Department’s respected Volunteer program, this human-canine team is not training to chase criminals, but to locate those who might have wandered off due to the effects of dementia, or children who have strayed from the family blanket on a crowded beach or away from the evening campfire in a night-shrouded wilderness.

The natural sensitivity of a dog’s nose is probably little appreciated by most humans, but is considered to be between 10,000 and 100,000 times more sensitive than human olfactory receptors.

Scientists at the Sensory Research Institute at Florida State University illustrated such acuteness: what humans see at one-third of a mile, in comparison, a dog could see at 3,000 miles.

Humans have no control over how their scents slough off. Scent molecules attach themselves to everything around them, from trees, flowers and fences to the tarmac of roads or cement of sidewalks.

And those molecules stick around for up to a week, even though wind and dampness may conspire to rip them from their tentative anchors, or other creatures’ molecules can contaminate a scent trail.

That German-bred Ekko is a prodigy is not the wishful thinking of a proud owner. It is the assessment by several of the top dog trainers in the nation, with whom Sandu has worked at not inconsequential expense. They all agree that Ekko has demonstrated in less than a year what other dog owners have taken three or four years to accomplish with their animals, Sandu said.

So what is it like to be on the search with a talented canine?

I tasked my wife, Katherine, to lay a complex scent trail on little Balboa Island 24-hours before I accompanied Sandu and Ekko on a “lost person” search.

The next day, the tracking team crossed the Island Bridge and immediately turned into the alley parallel to Marine Ave. There, the real challenge began, for there were as many competing scents as might be found at the Orange County Fair.

Ekko was focused, and showed confidence, but exhibited confusion behind the Chinese restaurant where unfamiliar smells wafted from the kitchen to swirl in an atmospheric muddle.

Winds and breezes do their own natural dances, but cars and trucks kick in their own freeform chaos to the airflows. Ekko’s challenges were compounded when a fire truck and ambulance navigated noisily onto the temporary bridge spanning to the little island, churning the air further.

Then, as if redirected by a molecular traffic cop of some kind, Ekko caught scent of Katherine and re-commenced his tracking.

He followed her trail almost unerringly, sometimes going past her detours, ignoring most dogs, but taking time to analyze their frequent liquid markings. He eventually returned to Katherine’s invisible track.

Thirty minutes after Ekko’s circuitous search began, he caught scent, then sight of Katherine sitting on a bench, reading a book at the intersection of South Bay Front and Abalone. A homing missile couldn’t have been more positive in finding a target.

Proudly, Ekko sat down next to Katherine, victorious. He also knew that tasty treats and enthusiastic pats were his rewards.

Sandu smiled like a proud parent whose son just pitched the perfect Little League game. It had been the most complex search in Ekko’s young and precocious career. Katherine and I came away enthralled at having watched a future Canine Hero Hall of Famer.