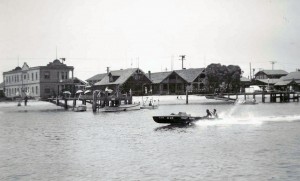 It’s easy to imagine the uproar that would be caused if a promoter wanted to bring hydroplane races up and down Newport Harbor. These extremely fast flat bottom boats are very noisy and very fast. The wakes, (waves the hull cause moving through the water,) are not very large compared to conventional boats, which bay front homeowners would use as a reason to prevent our city council from issuing a special events permit.

Safety would also be a reason to halt a high speed race in our harbor. Hydroplaning race boats have been known to become air bound and up end or turn over in uncontrollable maneuvers. There aren’t many spectator areas for the public to view such an event. Using the turning basin as a boating anchorage for spectator areas would put the anchored yachts in harm’s way if a race boat became uncontrollable.

Reminiscing of past events as a child brought to mind what an uproar hydroplaning race boats caused in serene and peaceful Newport Harbor. For two years in the mid-fifties the most exciting boat races I’ve ever witnessed in our harbor caused quite an uproar in our partially developed city. There was still a bunch of empty lots along the bay front, Linda Isle was homeless and sand dunes, Promontory Bay was sand dunes and bay less and the population of Newport was around 22,000.

We were a summer seasonal community and a lot of the businesses around the Pavilion and the Newport Pier closed for the winter and spring months. The Rendezvous Ballroom near the Balboa Pier was a weekend event for the locals and inlanders, and the Castaways Park was a restaurant by that name with a waterfront view to die for and an elegant menu.

Fiberglass yachts were unheard of and only skiff size with skeptics galore. Expensive to build wood boats were the norm and were considered the true “yacht.” They were also expensive to maintain with varnished mahogany galore.

Alan Ladd, Victor McLaglen, James Cagney, Humphrey Bogart and many, many more Hollywood types had weekend retreats here and Marilyn Monroe was married at 19 and lived in Avalon with her birth name. Many more L.A. types used their yachts berthed in Newport as their summer homes as Marina del Rey hadn’t been conceptionalized. It was a carefree and gay era and the “livin’ was easy.”

The Boy Scouts had completed a National Jamboree in the vacant weeds of what was to become Fashion Island, and adjacent to that area the Buffalo Ranch was a Sunday drive event–and yes Martha, they had scores of Buffalo.