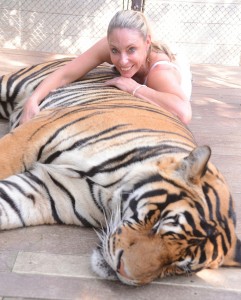 A friend said I should write an article on being fearless when she saw the picture of me with a tiger.

So many people told me it was an incredibly brave thing to do, but it did not seem so brave to me.

Bravery to me means being able to go beyond what we know as social norms and what we understand about life or the world.

Bravery is willing to be shunned or told we are wrong because we want to stand by our values or to make life better for people.

We can see this in so many people throughout history, be it the art world such as Pablo Picasso, the physics world (Steven Hawkins), social justice (Martin Luther King), the world of peace (Mother Theresa), the world of psychiatry (Freud), and how can we even box Albert Einstein?

These are just a few of so many who I consider brave, willing to offer the world their intrinsic gifts no matter what the cost for being their best version and/or looking at the greater good of human kind, sometimes even at the cost of their own life.

I believe we all are brave and have something incredible to offer the world.

To me, being a great parent is one of the bravest things you will ever do. It takes bravery for so many reasons including self-sacrifice, being able to build the personality of your child without getting stuck in societies over-doing mode, managing your own agenda, being tired and wanting to sleep but you stay up anyway, to role modeling good values and perspectives yet allowing them to find their own path.

This takes bravery. Lots of bravery.

Bravery often means stepping out of the norm. It is human nature to do what is status quo. How many times have we done something or went along with others just because we thought we should, not because it was what we believed to be right. It takes more courage to speak your truth, but we feel better about ourselves when we do.

I want to go back to how we are all brave. When we worry less about what others think and are committed to being the best version of ourselves, we will stand by our values and what is important to us.

You don’t need to play with a tiger, but have the courage to love someone, to stand up for your values, to use your creativity, to do what you believe in even if others do not.  Imagine if Einstein, Picasso, or Mother Teresa were not brave and willing to stand for what they believed. Think of what the world would be missing.

I was at a Rotary meeting a few months back where our speaker was a 16-year-old student who started a clean water project in third world countries. That is brave.

So go out and be brave, go and change your corner of the world for the better, even if it means just your household. Go be brave.

And if you want to try something fun, go hang out with a tiger.