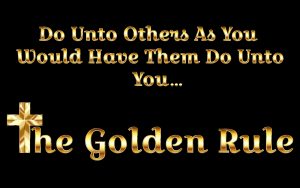 Nearly 40 people from nine different places of worship met recently at the Pacifica Institute in Irvine for the monthly meeting of the Newport-Mesa-Irvine Interfaith Council.

Lane Calvert, President of the Interfaith Council, welcomed the group and explained the agenda.

“We want to hear what the Golden Rule means to you and your different faiths,” Lane said. “The idea came up at our board meeting,”

“Paul Tillich told us that ‘the first duty of love is to listen,’” Rev. Wiltshire said. “It’s hard to do; it takes skill to listen. It’s easier to hear than to listen. But empty out your assumptions and listen to what’s important to everyone.”

Participants were given a list of how the Golden Rule is stated and where it is written down in different religious texts for 15 Faith traditions ranging from Baha’I to Zoroastrianism. They then broke into small groups of four or five people to discuss how each interprets the Golden Rule as well as what they wish others knew about their faith.

I sat with Kashif Zubair, a Muslim from Irvine who manages a Facebook page called “Kashif Zubair on Islam 101,” Carol Lambert from the Church of Jesus Christ, Latter-day Saints in Newport and Susan Williams from St. Mark Presbyterian Church in Newport.

“In Islam the Golden Rule is that ‘Not one of you truly believes until you wish for others what you wish for yourself,’” Kashif said. “When it comes to humanity, Islam doesn’t discriminate against anyone based on their color, creed, and ethnicity. I’d like people to know that the beauty of Islam is to have a direct relationship with God without any intermediary, and Islam is the fastest growing religion in the world.”

“God has spoken to all of us to love one another,” Carol Lambert explained. “We are to do unto others as we would like done to us. By living out my life according to what Christ says, I can live out the Golden Rule. I would like people to know that Mormonism is not a cult and all people are welcome to come to our church any time.”

“We live out the Golden Rule through forgiveness and compassion, by putting ourselves in the other’s shoes and showing them honor and respect,” Susan said. “It’s hard to do. It takes humility. In Christianity, it’s not just what you think, but what you do. Jesus said to feed the hungry, give shelter to the homeless and clothes to the naked. “

The Newport-Mesa-Irvine Interfaith Council is made up of over 123 Congregations and Faith Communities, as well as hundreds of religious leaders from the three cities, sharing the vision of building a community that honors and respects each other’s faiths. Their stated mission is “A spiritual and ethical force of faith community representatives that enables inter-religious dialogue and service.”

Farrah Khan, Executive Director of the Interfaith Council, was very pleased with the event.

“I loved the meeting because as one of the tables stated, they were amazed to realize that all the faiths at the table believed that you didn’t have to be of any particular faith to enter heaven and that Jesus was a prophet/religious figure in their faiths,” Farrah said. “These are the types of things that connect us to one another and build lasting relationships.

“We are an organization that has open doors for anybody,” she continued. “We promote respect, understanding and cooperation for all faiths. We would love more people to come and share.”

The group will resume again in September. For further information, visit nmiinterfaithcouncil.org.