It’s all the rage.

Everyone has seen it somewhere.

Just below a drawing of a crown, the large capital letters in simple font, “KEEP CALM AND CARRY ON.” 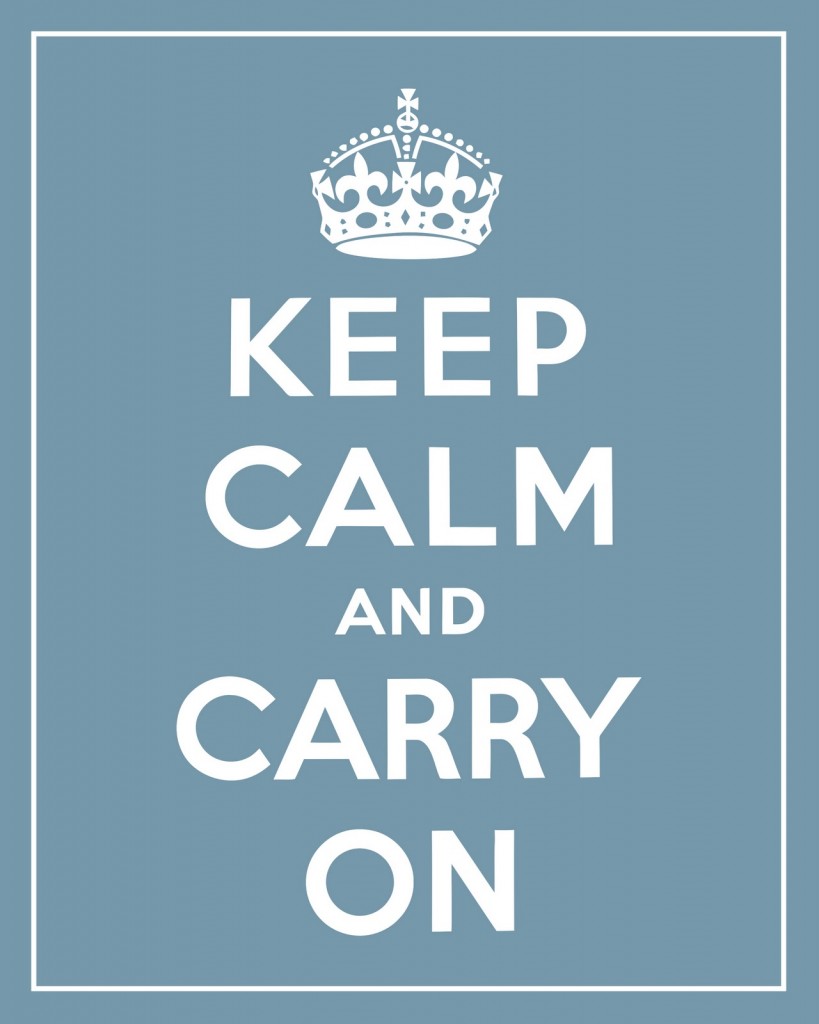 The message has been printed on everything from posters to coffee mugs, pacifiers, pins, pillows, watches, mouse pads and jewelry.

The phrase was coined by the British Ministry of Information at the outbreak of World War II – hence the crown at the top. It was the third slogan in a series of posters they printed in order to raise morale among the people who faced a terrifying and uncertain future.

The first two posters, “Freedom Is In Peril. Defend It With All Your Might,” and “Your Courage, Your Cheerfulness, and Your Resolution Will Bring Us Victory,” received such poor public reception that the ministry decided not to publicly display any of the thousands of  “Keep Calm” posters, promoting the typically stoic stance the Brits take when facing conflict of any magnitude.

It all but disappeared before making its debut in 2000, when an English couple, Stuart and Mary Manley, discovered one of the originals folded up between a pile of books. The Manleys run a secondhand bookstore in Alnwick, the town in northern England which previously was only known to be home to the medieval castle seen in the first Harry Potter movie. They framed the nostalgic poster and hung it near their cash register. It received so much interest, they began selling prints.

Soon, a young English entrepreneur named Mark Coop got wind of the rapidly spreading popularity of the five words and trademarked the slogan with the EU, giving him exclusive rights all over Europe to sell memorabilia.

People have carried on, but not so calmly. There is currently a lawsuit to revoke the trademark, as many argue it is not his intellectual property, it is part of British culture.

I love the phrase and have found that it can be applied to almost every pitfall, frustration, and curveball moms face daily. It’s like the new “No use crying over spilt milk” of our generation. The Ministry of Information sort of nailed it. KEEP CALM AND CARRY ON can be applied to the atrocities of war as well as the challenges moms deal calmly (cough) with daily: kids repeatedly leaving the light on in the bathroom, throwing a retainer away on a lunch tray, not being able to find the other shoe when it’s time to leave, having to be told over and over to empty the dishwasher, waiting until the last minute to do the summer required reading.

Whether or not the British people saw the poster hung in public places, they carried out the message just the same and the war was won.

We can learn a great lesson here. While in the trenches, the best thing we can do is Keep Calm and Mother On.