Nearly three dozen chefs and 320 guests were barking up the “right” tree at the Chef Masters culinary extravaganza held October 16 at the Festival of Arts grounds in Laguna Beach, which helped raise $450,000 for Unconditional, a senior and special needs dog rescue.

The evening began with a two-hour gourmet food and wine reception—some might call it Yappy Hour in honor of the nonprofit’s furry clients. Chefs from top local restaurant – including many from Newport Beach and Laguna Beach – served signature bites.

The best decorations of the night went to Pelican Hill Resort in Newport Beach. Their whimsical display took a page or two from “Alice in Wonderland,” with signage and décor straight from the book, with costumed staff to match. Even the food would have pleased both Alice and the Mad Hatter, with desserts that said “Eat me” written in chocolate and small bottles of green liquid labeled “Drink me.”

After guests had their fill of the culinary tastes and sips form such wineries as Daou, Duckhorn and Goldeneye, guests made their way to tables for dessert and raffle drawings.

Proceeds from the event totaled $450,000 and went to Unconditional, a Laguna Beach-based nonprofit co-founded by Amy and JulIan Mack, who were at the event with three of their rescue dogs. The group is on track to build an 8,000 sq. ft. rescue and adoption center for senior and special needs dogs, due to open in Laguna Beach in late 2023.

“Of the 14,000 shelters and rescue groups in the US, only 40 are dedicated to helping senior and special needs dogs and many of them are incredibly under-resourced,” said Amy Mack. “We are dedicated to finding loving homes for these animals, and, believe me, the experience is very rewarding.”

“It’s a separate for-profit run specialty animal hospital, which will be open to the public, but more importantly, it will also provide all the medical care needed for the animals at Unconditional at no cost,” Chang said.

The evening concluded with dancing to the popular band Flashback Heart Attack. 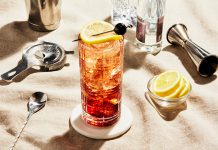 Cheers to 50 Years of Sur La Table with Signature Libation