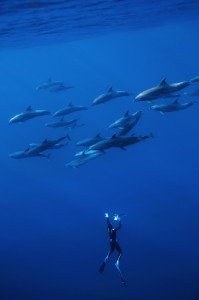 ExplorOcean at the Balboa Fun Zone launched the first of its 2014-15, seven- part lecture series last week. The subject was “Deep,” frighteningly and fascinatingly so.

“Deep” is the title of a 258-page book on the sport of free diving, where finely conditioned men and women hold their breath en route to plunging as far down as they can before having to resurface for air.

The world record on a single breath lasting 11 minutes, 35 seconds is listed at 700 feet. Nestor’s subtitle clarifies the book in its entirety: “Free Diving, Renegade Science and what the Ocean tells us about Ourselves.”

Free diving “…is one of the two most dangerous adventure sports in the world, especially if you do it recklessly,” opined author/journalist James Nestor, 44, in front of a packed audience at ExplorOcean that seemed to want to hyperventilate after watching a short film of a French free diver who descended to the floor of 300-foot-deep abyss for the simple pleasure of it.

He climb/swum up crusted walls to the surface, unaided and on one breath held for nearly eight minutes.

All humans are capable of extreme diving without SCUBA gear, Nestor said, claiming that we are “born to the ocean.” Even a Tibetan monk living alone in a Himalayan cave and having never seen a sea is such an animal.

“Each of us begins life floating in amniotic fluid that has almost the same makeup as the ocean. Our earliest characteristics are fishlike – and we are one gene away from developing fins 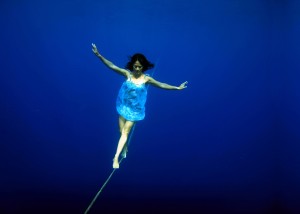 instead of hands,” he explained. “Human blood is startlingly similar to sea water; at eight weeks of development, humans have gills, and a newborn infant will reflexively do the breast stroke and hold its breath for about 40-seconds – longer than many adults.”

At about 700 feet depth, past where humans can free dive without having their organs pancake from the pressure (and survive) and where surface light is filtered to nothingness, creatures such as sharks, dolphins, seals and whales have evolved senses to navigate, communicate and “see.”

According to Nestor, humans share those extrasensory abilities – although through the eons of terrestrial existence, most have become atavistic; never the less, with extensive training, our inborn physiological “master switch” can selectively turn on to adjust to the variety life-threatening conditions met while descending and under unearthly pressure.

As impressive as a human deep free dive is, Nestor shares that Sperm whales, at 125,000 pounds the largest creature ever to inhabit the earth, can dive down 10,000 feet into pitch-blackness, and stay there for at least 90 minutes, hunting giant squid by a method called echo-location. 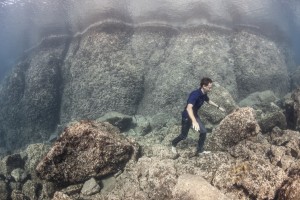 This is a series of clicks that they use to both navigate and hunt, and communicate with others of their species. Some scientists report that the calls of these behemoths can be heard halfway around the world by other whales. In fact, the clicking emanations are so powerful, the sound waves can rupture divers’ organs should they swim too closely, Nestor said.

Most marine mammals of any size are wary, if not afraid, of humans in SCUBA gear, or other equipment. But what free divers have discovered is that when diving amongst these denizens sans equipment, the animals are unafraid; in fact, they’re curious if not welcoming – including man-eating sharks.

Nestor experienced the friendly curiosity with a deep-diving pod of Sperm whales that echo-located on him and his dive mates from approximately 2,500 feet below.

As the whales approached, their clicks “kept going off like atom bombs in my chest and head.”

In fact, one diver said that his body actually heated up from the powerful sonic compressions,” Nestor shared. For those who can’t comprehend the experience, the author compared it to the clicking and other noises given off during a CT scan.

Because free divers blend in so seamlessly with other fish and mammals, this now appears the best way to study these shy and mysterious sea life. And free-diving research is going on around the globe, mostly by the French, who are acknowledged to have developed the sport of free diving.

Although Nestor grew up a child of the ocean, learning to dip his toes in the surf at Corona del Mar Beach as a three-year-old, he never paid attention to free diving as a sport until he became a freelance adventure writer 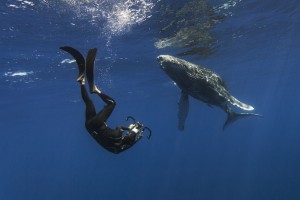 for the country’s leading specialty publications, such as “Outdoor Life” and “Men’s Journal,” and for the San Francisco Chronicle newspaper.

After living with free divers off Greece, while writing a story, Nestor became so enamored with the sport that he has spent the last year and one-half training to hold his breath at depth. He’s quick to caution that you “can’t push it to the point of discomfort. This is dangerous stuff, and you can’t be reckless.”

Before he learned he could earn a living churning out adrenaline-oriented articles, Nestor was first an English teacher then an advertising copywriter for a wide spectrum of high tech companies in San Francisco, where he currently resides.

Like a virgin coral reef, “Deep” (the book) is rich in living fact – and Nestor’s experiences, discoveries and teachings make one want to journey into the aqua-verse of which only one percent has been truly explored.

“Deep” is available at Barnes & Noble.

Jan. 22: Captains Michael and Barbara Lawler: “Circumnavigation of the Channel Islands on Traveler.”

Feb. 19: Dr. Christina Frieder, USC Researcher: “Much Smaller than your pinky: larval Life in the Ocean.”