This is truly a “moving” story.

Two young Concordia University students meet, fall in love, conceive a business based on the KISS principle (keep is simple), earn their Bachelor’s degrees in Marketing and Business Management, file for and get a DBA shortly after graduation, obtain both their marriage and business licenses, get hitched, and shortly after their honeymoon launch the first-of-its-kind-on-the-West Coast company, PiggyBoxes, from their apartment at Promontory Point.

With a moniker that sounds like it might appeal more to the pork industry, PiggyBoxes actually is a “moving efficiency” company that provides re-usable, eco-friendly, easily stackable, and nearly unbreakable, made-in-the-USA containers for almost every kind of moving challenge.

In the two years that Todd and Jamie Lohr have been growing their fledgling company, they have leased out more than 10,000 boxes to both individuals and major corporations in Newport Beach and Irvine, who all understand that cardboard boxes just can’t be depended upon to reliably hold heavy and oft-times valuable loads without testing weak folds, torn flaps or the adhesive integrity of duct tape.

Todd honed his PiggyBoxes concept while working as a property manager for the Irvine Company, where he often helped tenants move from those giant apartment complexes.

“I rapidly discovered that cardboard boxes are a pain to build, they rip, and fall apart; then, after use, what do you do with them?” he said.

In their keep-it-simple management philosophy, Todd and Jamie decided that they’d market but three items: two sizes of industrial-strength plastic containers (including a wardrobe container that folds out for easy clothing transition from hanging closet to transportable closet), and the third, a dolly perfectly dimensioned to fit the boxes.

Moving companies see PiggyBoxes as a small intrusion into a not-so-minor cost add-on to their moving services:  the purchase of cardboard packing boxes, estimated 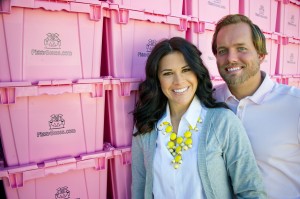 nationally to approach $200 million in sales per year.

PiggyBoxes leases its easily identifiable pink – yes pink – boxes for a period of two weeks, at a cost of approximately $3.00 per box. For their “extra-small” moving category, a renter would pay $59 for 15 boxes, one dolly and free box labels.

At the other end of the pricing scale, a “three-bedroom” move will cost $239 for 75 PiggyBoxes, including three dollies and free labels for a two-week period. They offer a multi-week discount beyond that fortnight.

One major Orange County-based international car corporation had leased 400 boxes for two weeks. They’re still renting them going on four months, which necessitated a rush order of 1,000 more pink boxes to keep pace with their orders.

By the way, those boxes match Todd and Jamie’s pink shirts and pink truck – a visual technique that has paid off in recognition of their service.

Not everyone enjoys the deep pockets of a global corporation. Recently, Todd recalled, a PiggyBoxes customer called frantically at the end of two weeks to have Todd pick up the boxes to avoid more rent. As Todd went to the garage to gather the containers, there poised like perfectly spaced rectangular anthills were 40 piles of clothing awaiting assignment to drawers and shelves in the man’s new home.

Only once in 10,000 rentals has Todd received a damaged container in return. A customer had placed the box on the stove, from where she was going to remove kitchenware.  Inadvertently, while moving the box, she swiveled a stove knob. Plastic does poorly on stovetops turned to high. No fire resulted, but she did have to buy a new stove.

As do many entrepreneurs, Todd and Jamie now are struggling with their future direction.   On one hand, they wish to stay local, perhaps expanding to no more than five contiguous counties. On the other, Todd sees great potential in franchising PiggyBoxes. One has more headaches than the other, but they’re unsure which one would produce the greater pain.

In the meantime, they’re happy and productive. One might say they’re in the pink.”