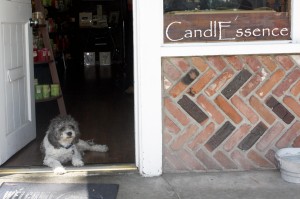 For 40 years, Laguna’s official shaggy greeter, Eller Larsen, waved a hearty welcome along PCH to all who entered that beach-and-arts community.

Balboa Island also has a shaggy greeter. His name is Oliver.

Unlike Larsen, Oliver doesn’t wave. In fact, for most of the day, Oliver doesn’t move – except when he decides to amble out the front door of CandlEssence Handmade Scented Candles to sniff other dogs, or take the proffered pats and treats that most everyone who walks by showers down upon him.

According to Stacey and Neil Roberts, Oliver’s owners and the proprietors of CandlEssence, “More people know Oliver than they do us, and he gets way more visitors.”

Throughout the day, people sit with Oliver on the bench in front of the store for photo ops. Virtually everyone e-mails a picture to Stacey and Neil; well, actually they’re addressed to the attention of 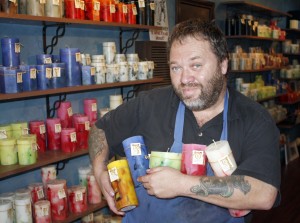 Oliver may be their pup-lic relations rep, but it’s Stacey and Neil who work doggedly at least six days a week to produce and sell their unique, handmade candles, which have gained an international reputation.

Many of the Roberts’ loyal customers were island visitors who became introduced to CandlEssence merely by inhaling the myriad fragrances that seemed to dance out the front door to collide with the traffic and olfactory nerves along Marine Ave.

The couple has lost count as to how many candles they’ve custom-blended in their storefront “workshop,” but Stacey estimates they mold approximately 75 new candles in three general sizes every three days, amounting to more than 9,000 candles annually.   On most days, customers can choose from up to 600 candles displayed in rainbow phalanxes on their shelves. 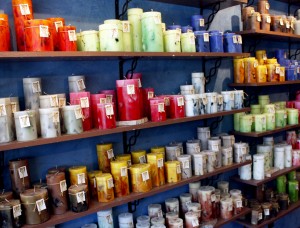 Most measure four-inch, six-inch and nine-inch in height. If burned according to the specific instructions that Stacey shares with each customer (or can be found on their website), CandlEssence candles should burn consistently for between 100 and 250 hours, depending on size.

A nine-inch candle selling for $22.95 burns for 250 hours. That translates to slightly more than nine cents per hour of pure sensate pleasure: that visual room warmth only a candle can provide, along with perhaps the most powerful memory-generating of all the human senses: the candle’s scent.

Of the more than 1,000 exotic, perfumed oils on hand with which to blend, Blood Orange is their most popular. However, Neil injects more odiferous entertainment at holiday times.

For the Fourth of July, there’s “Red, White and Blue-berry.” For Valentines, one can select from Merlot, fresh-cut roses and chocolate. On Mother’s Day, they sprout candles in several floral varieties. And for Halloween, they scare up either pumpkin or black licorice fragrances.

Throughout the year, many of their customers request special color combos or scents, which they gladly blend. One Boston-based customer orders 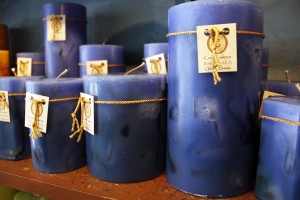 a year’s supply, which she ships back with her poodle after their annual Balboa Island vacation.

Many customers collect the remnants of their depleted candles, bag them, then bring them in to be re-blended into what becomes their own unique colors – often in harmony with their interior décor.

If there is such a candle-industry appellation as alchemist, Stacey could be termed one.   “I spent more than six months developing the formula for our candles,” Stacey said. She tested any number of waxes singly and in combination, plus additives, coupled with a variety of wicks in order to maximize both burn time and evenness of burn. The mix of raw materials is that secret she and Neil hold close to their apron bibs.

“That’s why our candles are so different,” Stacey beamed with pride.

For more information, go on line to CECandles.com and join the thousands who wax poetic about Balboa Island’s candle couple. And Oliver.