Those opening words from Charles Dickens’ “A Tale of Two Cities” could well apply to 2020. The year started well, then it became challenging to find the best of anything in a year most people would like to forget.

Newport Beach Indy Editor Christopher Trela takes a look back at the stories that made headlines in Newport Beach during 2020.

The year started well with Newport Beach Mayor Will O’Neill declaring 2020 the “Year of the Volunteer.”

January saw the closure of Newport Stationers, which bid farewell after 55 years in the community. At its peak in the 1990s, Newport Stationers had 165 employees, four retail stores, a printing shop, a fleet of five trucks, and an office machine sales and repair business. It had downsized to seven employees, plus a husband-and-wife janitorial team. The final Newport Stationers location closed after the Irvine Company refused to continue accepting discounted rent that helped keep the doors open for the last 19 months.

January ended in tragedy when Newport Coast resident and Laker’s basketball legend Kobe Bryant and his daughter Gianna were killed in a helicopter crash along with seven other people.

“Our city mourns the loss of a father, a husband, and one of our most giving residents,” Newport Beach Mayor Will O’Neill wrote in a statement. “He was a champion on and off the court. Our thoughts and prayers are with the Bryant family during this devastating time.”

“Our hearts are incredibly broken all over Newport Beach for the loss of Kobe, his daughter and members of other Newport Beach families,” wrote Councilmember Joy Brenner. “Hopefully they will inspire the rest of us to work even harder to be in loving service to all that is good and right.”

Newport Beach City Council and local residents spent nearly two hours discussing possibly prohibiting motorized uses on the Oceanfront Boardwalk on Balboa Peninsula, a topic that has spurred debate for several years. Once again, opinions were split on the issue during a City Council study session. People mostly agreed that speed was the primary concern, but couldn’t reach a consensus on whether or not banning e-bikes was the solution.

The Newport-Mesa Unified District Board of Education awarded a $5 million construction contract for security fences around Ensign Intermediate School and Corona del Mar High and Middle schools, despite the objections of about two dozen students, parents, and neighbors, who held up enlarged photos of trees that are scheduled to be removed and replaced with new trees to make way for the construction, which will include adding two parking lots for staff and visitors and a drop-off/pick-up lane.

That was one of the last major events to be held in Newport Beach in 2020, because little more than a week later on March 17, following Gov. Gavin Newsom’s updated guidance for all communities throughout California to limit the spread of COVID-19, the city of Newport Beach declared a local emergency.

“This will allow the City of Newport Beach to potentially recover federal and state funds spent responding to the situation created by COVID-19 and to coordinate with other government agencies,” city officials wrote in a message. “At this time, there are no reported cases of COVID-19 in Newport Beach and the risk of contracting the virus in Orange County is still considered low.”

At that time, Newsom called for all bars, wineries, nightclubs and brewpubs to close throughout the state, urged all seniors and people with chronic health conditions to isolate themselves at home, and for restaurants to reduce occupancy by half to keep people farther away from each other.

All City beachfront parking lots, the Newport Pier and Balboa Pier closed as of March 25, and on March 27 the city closed the Oceanfront Boardwalk on the Balboa Peninsula. In addition, the Balboa Island Bayfront Walkway became a “one-way” sidewalk with signs directing pedestrians to walk in a single direction.

Local organizations, including the City Council, began holding meetings and other events virtually, with the Zoom platform being the most popular.

Annual events including the Newport Beach Film Festival, held every April for the past 20 years, were either cancelled or postponed. 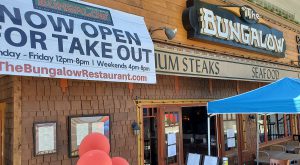 After numerous restaurants in Newport Beach closed temporarily due to state mandates, many began to reopen and offer take-out menus and delivery.

Some community members began defying beach closure orders, and the city eventually reopened the beaches for “active recreational use.”

Retail stores that had been closed due to coronavirus restrictions were allowed to reopen for curbside delivery.

Newport Beach City Hall began a phased reopening, and restaurants began to plan for limited indoor dining per guidelines from the state of California.

The Junior Lifeguard program was modified due to COVID-19 restrictions, and the City Council approved an ordinance allowing business to expand their footprint outdoors.

Local high school students held a peaceful protest at the Newport-Mesa unified School District office, protesting the virtual graduation ceremony the district was mandating due to the coronavirus pandemic. 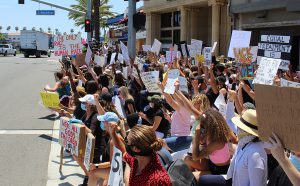 The coronavirus took a back seat to the Black Lives Matter movement when five different peaceful demonstrations were held at locations around Newport Beach on Wednesday, June 3.

Demonstrators at all protests held signs and chanted “Justice for All,” “Black Lives Matter” “I Can’t Breathe” and “George Floyd” in response to the asphyxiation death of George Floyd by a Minneapolis policeman on Monday, May 25.

Newport Beach Chamber of Commerce President and CEO Steve Rosansky in a video message announced the new State of California order to wear masks in public.

“In a just released statement, the California Department of Public Health has developed new guidance for wearing masks in public,” said Rosansky in the video. “Under the new guidelines, everyone must wear a mask in public indoor spaces, at their place of work, preparing food for public distribution, visiting a medical facility, riding on public transportation, or being out in public and not being able to maintain at least six feet of distance from non-household members.”

The City of Newport Beach closed boardwalks and beaches for the Fourth of July weekend to prevent large gatherings, and new state COVID-19 restrictions closed all indoor service for bars and restaurants.

Newport Beach City Hall closed to the public beginning July 13, based on concerns for the health and safety of employees and the public as COVID-19 cases increased throughout the state and County of Orange. 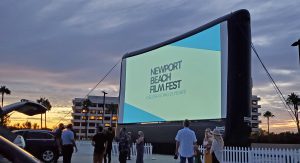 The Newport Beach Film Festival had postponed its 2020 Festival until August, but with movie theaters shuttered due to the coronavirus, the Film Festival presented a spotlight screening of the world premiere of” A Life of Endless Summers: The Bruce Brown Story,” the film originally scheduled to be the opening night premiere for the 2020 Film Festival. The film was shown in an outdoor drive-in format on the upper level of the parking structure located between Bloomingdale’s and Nordstrom at Fashion Island.

Not to be outdone, Campus Jax restaurant launched a Sunset Dinner and Concert Series on its expanded patio featuring popular tribute bands and local artists.

Newport Beach resident Joe Stapleton, president and co-founder of Spinnaker Investment Group and an active member of a number of local community groups and organizations, was named the Newport Beach 2020 Citizen of the Year by the Newport Beach Chamber of Commerce. Stapleton joins a long list of honorees dating back to 1949.

On Tuesday, Sept. 8, Newport Beach Chamber of Commerce President and CEO Steve Rosansky announced via a video sent to Chamber members and other businesses and community members that Orange County, and Newport Beach, had moved into the Red tier under the state’s new Blueprint for a Safer Economy, and many businesses were now allowed to reopen with limited indoor capacity.

One of the most anticipated local events every summer is the Newport Beach Lobsterfest, normally held in August. In 2020, the date changed to October 4 and the location was CampusJax restaurant, which created a large outdoor patio dining area complete with a stage and sound system. Due to coronavirus restrictions only 80 tickets were sold for on-site dining, but virtual to-go ticket options were available for those who preferred to enjoy this year’s Lobsterfest from the comfort of their own homes.

This was also the month that City Hall reopened to the public, and philanthropist Sue Gross donated $5 Million to Hoag Hospital.

Furry friends who are lost, abandoned, or need a place to go when their owners are unable to care for them will have a new home thanks to Friends of Newport Beach Animal Shelter (FONBAS) and a campaign launched in November dubbed “Raise the Roof” to raise the remaining $500,000 to build a state of the art animal shelter for Newport Beach.

On Monday, Nov. 16, Newport Beach Chamber of Commerce President and CEO Steve Rosansky announced via a video sent to Chamber members and other businesses and community members that Orange County, and Newport Beach, were moving backwards into the Purple tier under the state’s new Blueprint for a Safer Economy.

Two things you can always count on in Newport Beach every December: the Newport Beach Christmas Boat Parade, and the Ring of Lights Home Decorating Contest.

However, the Ring of Lights competition did take place, with homes throughout Newport Beach going all out with holiday décor.

As the number of COVID-19 cases continued to increase throughout the state and county, Newport Beach reduced in-person services at City Hall and other City facilities.

On December 3, Newport Beach Chamber President and CEO Steve Rosansky in a video message sent to Chamber members and supporters on Dec. 3 detailed new state stay-at-home orders, saying “the new regional stay-at-home orders come at a time when coronavirus cases, hospitalizations and deaths are surging statewide, and we haven’t even hit the surge on top of the surge expected from the Thanksgiving Day holiday.”

According to the City Manager’s Report on Dec. 4, the total number of COVID-19 cases in Newport Beach was 1,522 and the total cases in Orange County was 81,653. The number of recovered COVID-19 patients countywide as of November 19 was 61,068.

At the final City Council meeting of 2020, councilmember Brad Avery is named Mayor of Newport Beach for 2021.

To close out the year, 45 Newport Beach Fire Department employees received COVID-19 vaccines between Dec. 26 and Dec. 28, in the initial stages of a major countywide rollout to first responders. Officials expect the number to increase in coming days.