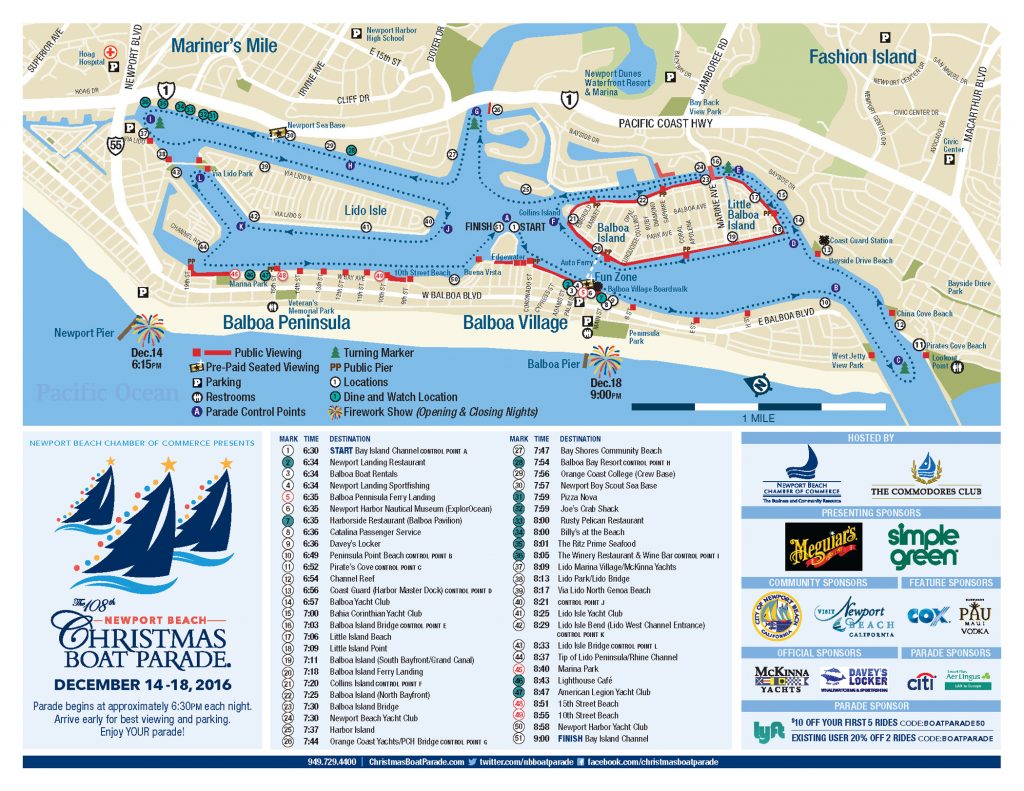 Drawing millions of visitors annually, the iconic Newport Beach Christmas Boat Parade is the largest harbor parade in California. Hosted by The Commodores Club of the Newport Beach Chamber of Commerce, the boat parade features approximately 100 festive entries of all sizes from yachts to dinghies, and a sparkling line-up of Grand Marshals, motoring along a 14 mile course to give viewers in restaurants, yacht clubs, on public beaches, and in private homes a sight that has become a cherished tradition for residents and visitors for over a century. 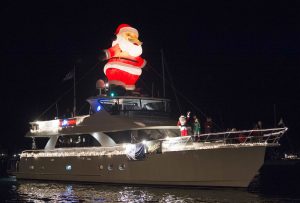 The parade begins at Bay Island at 6:30 p.m. and ends at the same site at approximately 9 p.m. each evening.

In addition to the boat parade, this year features a special charity event to benefit the American Childhood Cancer Organization.  For the first time, the organization’s National Golden Ribbon Awareness Tree will be erected on the west coast in Newport Beach’s Marina Park. The Newport Beach Chamber of Commerce and Newport Beach & Company are teaming up to make a significant donation to the group.

Fireworks help to kick off this year’s event and can be seen lighting the sky over the Newport Beach Pier at about 6:15 p.m. There will also be fireworks on Sunday night.

Wednesday, Dec. 14: The Disneyland Resort’s Main Street Electrical Parade is celebrated on the opening night of the Newport Beach Christmas Boat Parade as Mickey Mouse and the resort’s Ambassador serve as Grand Marshals for that evening.  The Disneyland Resort also is kicking off the boat parade with its own colorful Main Street Electrical Parade-themed boat. 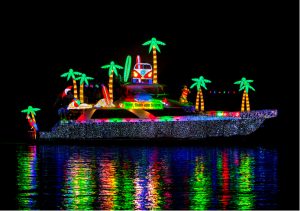 Sunday, Dec. 18: A Special Salute to Newport Beach local heroes – those first-responders and lifesavers who serve our local communities.

“Our Christmas Boat Parade has become an honored tradition for over 100 years, and it just keeps getting bigger and more spectacular,” said Steve Rosansky, president and CEO of the Newport Beach Chamber of Commerce. 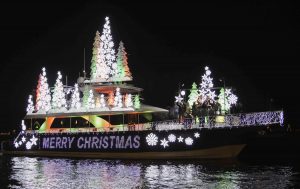 Watch the parade at the newly-reopened Lido Marina Village’s waterfront Main Deck. From Wednesday through Friday, Lido Marina Village will provide delicious treats and live entertainment to guests viewing the parade. The Main Deck also will be open for parade viewing on Saturday and Sunday. Enjoy a marvelous view of Newport’s favorite holiday tradition and come early to dine at one of Lido Marina Village’s restaurants, and shop for friends and family at the stylish stores. For more information, visit lidomarinavillage.com.

The Balboa Fun Zone offers plenty of public viewing spots, and it’s where you can hear live commentary on the parade. Admission is free and parking is available in the public lot next to the Balboa Pier, but get there early as parking lots tend to fill up fast, especially on the weekend.

The Newport Sea Base at 1931 W. Coast Hwy has a seated viewing area on their lawn available for $10 per person in advance and $20 per person at the door. Food and beverages will be available for purchase. Site opens at 6 p.m., boats pass by at 8 p.m. Onsite parking is sold out, parking may be available in nearby lots. Call (949) 642-5031.

Many local yacht charter companies take visitors out on the bay to watch the parade, including 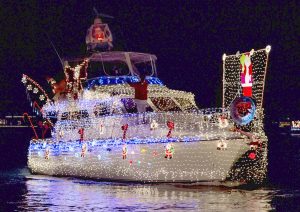 Only in Newport could you enjoy a gourmet dinner while watching a parade of boats. A handful of bayside restaurants and venues offer ideal parade viewing, while others (such as those on Balboa Island or in Balboa Village) don’t offer direct viewing, but they’re a short walk from the waterfront and can be less-crowded than restaurants along the parade route.

For a complete list of Boat Parade dining options, see the Off the Menu column in our Eat & Drink section.

Perhaps the best solution to traffic and parking is to take a taxi or Uber to either Balboa Island or Balboa Peninsula. The fare is worth avoiding the parking hassle, especially on the weekend.

Some boat owners spend more than $50,000 to decorate their vessels for the Christmas Boat Parade, which is much more than Italian gondolier John Scarpa spent in 1907 when he took a group of visitors across Newport Bay in a gondola decorated with Japanese lanterns.

A year later, on July 4, 1908, Scarpa and other small boat operators put together a loosely organized parade of nine illuminated vessels led by Scarpa’s gondola and followed by eight canoes.

It might not have been Christmastime, but the Boat Parade was officially born.

The parade – then called the Illuminated Water Parade – was held again in 1913, and for several years thereafter until the outbreak of WWI, when the parade went dark. In 1919 it was revived by Joseph Beek, who was operating the Balboa Island ferry service. Floats that could be towed around the harbor were constructed in Beek’s garage; some were patterned after those seen in the Rose Parade.

The boat parade continued until shortly after World War II, when the parade became so popular that traffic along the parade route became too congested.

The parade shifted to December and was rechristened the Christmas Boat Parade. Traffic is still congested, but not quite as bad as during the summer.