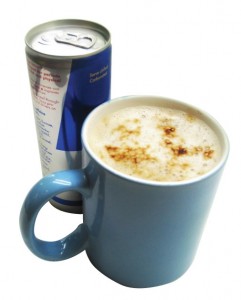 With Thanksgiving smoldering in the background, Black Friday consumes all attention with its deals! deals! deals! for the Christmas holiday.

The left-over cooked turkey has barely frozen over as consumers everywhere grab their car keys, rev their engines and set off in what is the beginning of the holiday rush.

Like turning the knob on a radio to pump up the volume, Black Friday guns everyone’s stress level just up a notch, with each following day swelling into stressful crescendos of shopping, parties and midnight wrapping sessions, the Christmas hustle-bustle of 2013 begins.

Though this is the kind of stress that most everyone enjoys and welcomes with a warm heart, the accelerated pace offers up an excuse to crank up the caffeine.

Yet it isn’t what the body really needs to power through in a healthful manner such as yoga and enough sleep. But who has the time during the holidays? And in a country where one study indicates 90 percent of Americans consume caffeine in one form or another, how much do people really know about caffeine?

Caffeine, a natural occurring chemical stimulant called trimethylxanthine, is a drug, albeit officially a legal one found in many things we eat and drink. It stimulates the brain in the same form as some other not-so-nice drugs such as cocaine and heroin and is addicting.

Caffeine in its pure form is a white crystalline powder with a bitter taste. How does this affect the body? It starts in the brain.

Adenonsine is a chemical that promotes sleep by sliding into its special receptor in the cell so as to slow the cell’s metabolism down, thus causing drowsiness. Caffeine can bind to these receptors as well and when it does, the cell doesn’t know the difference. But instead of slowing the cell down, caffeine speeds it up. This increase in neuron firing signals the pituitary gland an emergency is happening, thereby triggering the adrenals to release adrenaline or what is termed the “fight or flight” syndrome.

And in turn the body’s pupils dilate, the airway passages open up, the heart beats faster, blood pressure rises, blood flow to the stomach slows, the liver releases sugar into the bloodstream for extra energy, and muscles tighten for action.

Dopamine is a neurotransmitter that activities pleasure centers in the body. Levels remain high when caffeine is ingested and researchers believe this is what gives the addictive value to caffeine.

The long term problem of caffeine is how it affects sleep. Adenosine is needed for sleep, especially a deep sleep which is essential for our bodies. And even though the body is able to fall asleep after caffeine has been consumed, hitting that precious deep sleep cycle might not happen, making for another tired morning and the cycle repeated with more caffeine.

An interesting fact to note is the half-life of caffeine in the body is up to six hours, usually leaving the body by 12 hours. A cup of coffee contains 100-200 mg of caffeine, with green tea containing 10-60 mg, and chocolate 13 mg.

Keeping the body in a “state of emergency” all the time with the adrenals constantly pumping its hormones is not healthy for the body and therefore all day caffeine drinkers should beware.

As for the elbow dodging, long lines and slow checkers encountered on these shopping days….stay calm and caffeine on.