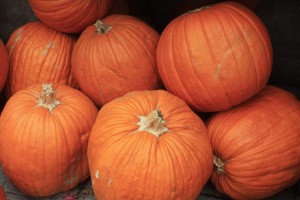 The pumpkin patch looked marvelously inviting with the full moon staring down onto it, the silvery light washing the orange skins with an eerie glow.

Crows lingered in the far off trees, cawing suspiciously at the tiny swirls of wind that lifted moon-blanched leaves into rolling waves.

Jack peeked around an old gnarled oak, ignoring the noisy carnivorous birds in the tree and light footed it to the end of the patch. Lord Frakensteen had always loved his pumpkins to be perfectly ripe and left them on the vines until the very last minute before the rotting of its flesh commenced.

Jack scanned the patch again, and this time he spotted the perfect one. There it sat, right in the middle of the patch, growing upright, the vine surging up three feet until it took a rounded turn to connect with the weighty fruit, the orange ribs bulging out in deep rows heaving the sides out far to finally collide together at the stem.

Jack stood mesmerized. He had found his perfect pumpkin.

As he slowly crept through the patch, weaving around other unworthy pumpkins, far off in the distance he heard a familiar voice, “Jack…….Jack, where are you…..Jack get over here right now!”

The screechy sound caused the patch to dissolve slightly into a section of the Safeway parking lot covered in straw, above it a streetlight flickering on and off in slow moving unpredictable sets. Jack didn’t notice. All he could see was that pumpkin, proud and tall in front of him as he ran to it. And just before he could throw his arms around it, “Jack what are you doing?” his mother cried out, grabbing him on the shoulder, stopping his forward motion into the most perfect pumpkin Lord Frankensteen ever grew.

As he stood facing his concerned mother, behind her the mighty castle rocked open its gates and out flew the ghastliest creature he had ever seen. The beast heaved smoke and vomited fire, throwing its purple head back as it lounged forward in a six legged gallop. Jack tried to warn his mom, but as all mothers who couldn’t see the world Jack did, simply shook her head and mumbled.

And that’s when the creature bit her head off. Or at least verbally that is. The store manager was incredibly testy and angrily remarked how many pumpkins Jack had knocked off the hay stacks and who was going to pay for them. That’s when Lord Frankensteen decided to show up and claim his pumpkins for his Halloween feast and in one big swoop of his cross-stitched hands, gathered Jack, the pumpkin and his mother up into his arms and ran them off to his kitchen where he prepared the best and delicious pumpkin dishes Jack ever tasted.

From pumpkin soup and baked stuff pumpkin to his favorite pumpkin chocolate mousse; ending it all with a kiss and a hug from mom. With the pumpkin a storehouse full of vitamin A, C, E, antioxidants, beta carotenes and carotenoids, vitamin Bs, and the minerals copper, calcium, potassium and phosphorous lodged in its tasty flesh a low calorie perfect delight can be made for imaginative little boys and serious adults alike. The seeds were kept and lightly toasted in the oven, drizzled with olive oil and saved later for a light nutritious snack filled with protein, mono-unsataurated fats (the good fats), and zinc.

Jack found out the best pumpkins to eat are the smaller sweet round ones which spared him his big giant pumpkin for an official pumpkin cutting ceremony sponsored by the Count who just coincidently lived several houses down.

His mother promised to make him a pumpkin-almond milk shake in the morning and so Jack settled into pumpkin dreams of headless horsemen, dancing scarecrows and pumpkin guts spewing out of two-headed monsters, just as all little boys do on the week of Halloween.