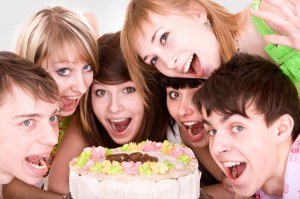 On Tuesday, the shrill noise pierced the blackness, waking me from a solid sleep. It was the sound of girls, ripe with giggles that swell like the sea before crashing into a wave of loud laughter, spraying the quiet night of our house.

A chorus of “Happy Birthday” led by Sally began in her sister’s room directly across from our bedroom. With Sally’s friend Jade and Janey’s friend Eliza joining in, the volume tripled.

It must be midnight, I thought. Janey is officially 13.

While I am long past being woken up in the middle of the night by any of our kids, I didn’t mind this too much. If nothing else, Janey and Sally weren’t fighting, Janey somehow was OK with her little sister being in her room. I later found the reason – Sally and Jade baked cookies and surprised her in the quiet of the night.

My husband got out of bed and I heard the muffled reminder to keep it down, and a Happy Birthday from him.

And so it was, that Janey’s entrance into teenagehood mirrored her entrance into the world. A quick, intimate celebration in the middle of the night as the rest of the world slumbered 13 years ago at 2:38 a.m. on August 14, 2000.

This year, Janey decided she didn’t want a party. She opted for a family dinner, red velvet “Nothing Bundt Cake” and pedicure at the Nail Lounge.

This was the easiest birthday ever. But I have collateral from my pregnancy with her.

The first trimester was marked by the ever present feeling that I was going to throw up any second.  Next, in addition to the severe nausea, I became sick for real – with a fever, a cough, and fatigue, the likes of which I had never before felt. In retrospect, I may have even had a walking pneumonia, although my walking was limited to going into the kitchen grabbing a box of cereal and walking back into the family room. In our 900 square foot house, that wasn’t much, but it felt like I was making the push to the summit of Everest.

Payton, two years old at the time, ate dry cereal out of the box in front of multiple episodes of “Thomas the Train” while I laid on the couch. That was a typical lunch.

In the eighties, at the height of the popularity of Prince’s “1999,” I wondered how I would be celebrating that special New Years Eve in the distant future. Surely at a big party dancing the night away, or perhaps I would be in some exotic city.

Never in my wildest imagination did it occur to me that the lyrics “Tonight I’m gonna party like it’s 1999” would have a new meaning, thick with irony. I was merely a spectator at best, watching with a bad case of bed head, in my pajamas, the revelers around the world on TV, bringing in the new millennium at grand parties with live music and fireworks. But I didn’t mind, because within me was a life growing, more important to me than anything.

Beginning with pregnancy and throughout her journey to becoming a teenager, Janey has taught me that small celebrations can mean the most; the brightest fireworks are the ones we ignite ourselves, and the song that we should sing loudly is the one in our own heart.