“All grown-ups were once children…but only a few of them remember it.”

My parents live in the same house in Newport Beach they moved into 38 years ago. I was 4 years old. (I will save you the mental math – I am 42).

Because we never moved, not much shrank. Shrinking only occurs when one moves away as a child and doesn’t return for decades.

Our family was recently in Philadelphia, a multi-generational trip with our kids and my parents. We traveled down the rabbit hole with my mom, taking her to Glenolden – a suburb of the city where she grew up until moving when she was fifteen.

As we approached the stomping grounds of her youth, her excitement could barely be contained. Memories engulfed every cell of her body as we traveled down Chester Pike.

“OK, there’s South Street where we caught the bus, so my house will be just up here on the left.”

Nostalgia is a powerful emotion, and the kids laughed at her enthusiasm. 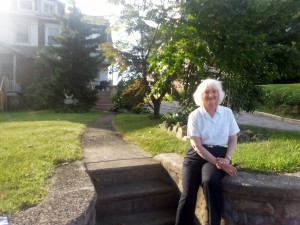 We pulled over and got out. The modest and well kept duplex with a large porch sat on Chester Road. The low grey stone wall, split by three steps, led to a path, which led to the front steps of the house.

“Wow, I used to think this wall was so big,” Mom said. She spoke of the game her and her brothers used to play on the wall – Up/Down. The person sitting on one side of the wall would own all the companies painted on the side of trucks that passed going down the slope of Chester. The person on the other side of the wall would own the businesses advertised on trucks traveling up the other side of Chester. My mom sat on the wall as a small Pepsi truck passed. “I own Pepsi” she laughed.

A few residential blocks behind her house lies the expansive Glenolden Park. Like a miniature Hyde Park in London, a narrow path cut through perfectly manicured grass and mature trees painted in every shade of green.

“This is where we watched the fireworks on the Fourth of July” she told us. “And right down there is a creek and a bridge; my brothers and I played there.“

Across the small residential street from the park, she pointed out the library. My husband pulled the car directly in front of it.

“I used to check out books here” Mom said. She sat looking at the small homey building out of the window of the car. “Wow, I had thought it was so big.”

It’s a common phenomenon,  going back to special childhood places. Either we have become enormous or the parks, homes, and libraries have shrunk.

Of course neither is true, and although our height has increased, it is our worlds that have grown the most. The enormity also lies in the memories. Children unknowingly increase the stock on experiences which jaded adult brains, clouded with responsibilities, minimize.

You would rarely hear a kid articulate, “I like this library, it makes me feel important when I come here and choose a book,” or “I feel happy and safe making up games on the bridge with my brothers.”

Childhood memories are pure, because we are unaware we are making them.

Chances are we will never return to Glenolden, but the memories stirred, brought a smile to my mom’s face. That, is an enormous memory I will forever treasure.