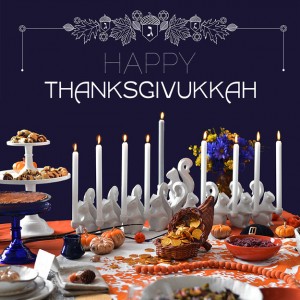 A Pilgrim, a Wampanoag Indian, and a Maccabee soldier walk into a bar…

All joking aside, the nation has been captivated by the once in a lifetime event – Hanukkah and Thanksgiving will be celebrated on the same day this year. Calculations show we will all be long gone the next time this occurs.

As rabbis and scholars draw historical comparisons, foodies incorporate ingredients and invent new recipes, and entrepreneurs try to cash in on decorations and menurkies (menorahs in the shape of turkeys), Jewish mothers from coast to coast have been preparing for the overlapping holidays.

Thursday, November 28 is Thanksgiving and the second night of Hanukkah. This day, dubbed Thanksgivukkah, has spurred a renewed curiosity in the origins of both holidays and a zest for making the celebration even more meaningful.

Thanksgiving and Hanukkah each commemorate events that happened in two very different corners of the world almost 2,000 years apart.

As Rabbi Ken Spiro states, “The light of Chanukah is symbolic of the inner spiritual strength of the Jewish people that despite all odds is never extinguished.”

The same can be said for the group of separatists that risked it all, boarding a cargo ship, not built for passengers, and enduring unthinkable conditions crossing the Atlantic only to arrive in a foreign land where their real troubles would just begin. These pilgrims, like the army led by Judas Maccabee, sought “against all odds” to secure their human right to worship freely.

Thanksgivikkah celebrates freedom and gratitude, two inseparable sides of the same coin. We will also celebrate family, friends and the kindness of strangers.

Edward Winslow, a passenger on the Mayflower, and later a leader of Plymouth colony wrote about what is now called the First Thanksgiving in Plymouth in 1621. Without the Wampanoag Indians, assisting strangers in their backyard, the Pilgrims would have had little chance for survival that first winter.

“Our harvest being gotten in, our governor sent four men on fowling, that so we might after a special manner rejoice together after we had gathered the fruit of our labors… many of the Indians coming amongst us…with some ninety men, whom for three days we entertained and feasted, and they went out and killed five deer, which they brought to the plantation…”

The harvest celebration, while joyous, must have been deeply marked by grief, still fresh, for those who had recently died.

Jewish people, accustom to this duality during holidays, have perfected the revered celebration. It is an impossibility to make merry without also acknowledging what who or what was lost to make an occasion possible.

About 1800 years before the Mayflower set sail, Judas Maccabee led a small rag tag army (by Greek military standards) in a revolt against Antiochus IV, a Greek ruler who made practicing Judaism punishable by death. At the heart of the Hanukkah story is a group of people so dedicated to their beliefs that they, like the pilgrims, put their lives on the line to secure their religious freedom.

This year, sweet potato latkes, challah stuffing and pecan pie rugelach will accompany our usual Thanksgiving fare. Dreidels and gelt will be placed amongst the Indian corn, making our holiday table extra festive. The light of the menorah will cast an extra bright glow, illuminating our gratitude for abundance, freedom, and our ability to share with strangers.

Happy Thanksgivukkah to all and to all a good night!